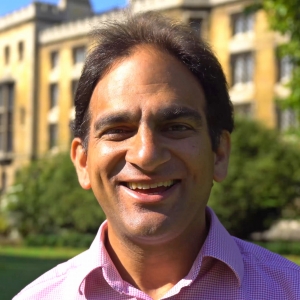 Performing in North America, South Africa, the Far East, and throughout Europe, Andrew Nethsingha has been Director of Music at St John’s College, Cambridge since 2007. He has released over 25 albums with the Choir of St John’s. He helped to set up the recording label, ‘St John’s Cambridge’, in conjunction with Signum Classics. The first release on this label, DEO (music by Jonathan Harvey), was a 2017 BBC Music Magazine Award winner. Six recent albums have been ‘Editor’s Choice’ in Gramophone Magazine. Pious Anthems & Voluntaries (music by Michael Finnissy) was runner-up in the Contemporary category of the 2021 Gramophone Awards. His announcement that in future the St John’s Choir will include male and female voices, both adults and children, was hailed by Classic FM as “one of the 10 defining classical moments of 2021.”

Andrew Nethsingha was a chorister at Exeter Cathedral, under his father’s direction. He later studied at the Royal College of Music, where he won seven prizes, and at St John’s College, Cambridge. He held Organ Scholarships under Christopher Robinson at St George’s Windsor, and George Guest at St John’s, before becoming Assistant Organist at Wells Cathedral. He was subsequently Director of Music at Truro and Gloucester Cathedrals, and Artistic Director of the Gloucester Three Choirs Festival.

A great tradition is thriving under music director Andrew Nethsingha.

END_OF_DOCUMENT_TOKEN_TO_BE_REPLACED
Nethsingha is his own man and absolutely his own musician, which is why his choir continues to evolve and lead