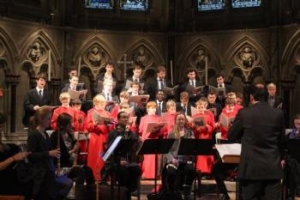 We aim to reach our target of £500,000 in order to keep the Choir at the forefront of developments in choral music through new commissions and other innovations.

A gift of £30,000 would fund one Cantata Evensong per term for five years, featuring players from the Orchestra of the Age of Enlightenment, one of the finest period instrument ensembles in the world.

The Choir regularly commissions music from leading composers, and one-off gifts of between £3,000 and £5,000 would fund new commissions of choral music.

"Only later in life did I fully appreciate how privileged I was to study at St John’s. Having been fortunate enough to have had my time there paid for by others, the College setting me up for my subsequent career, I felt it only right I should give something back. Listening to such a beautiful sound in our Chapel, in the knowledge I’ve somehow contributed, is such an emotional experience. I now attend Choir events not just delighting in the music, but also greatly appreciating the warmth with which I’m received on every occasion. St John’s Choir is special not only for its excellence, but also for the friendliness of those who bring about such excellence. I can’t recommend donating to the Choir strongly enough, and I urge you to join me."

The Choir has recorded a new nine-part cycle inspired by the architecture of the College Chapel, and composed by Michael Finnissy, St John's Composer in Residence 2016-19