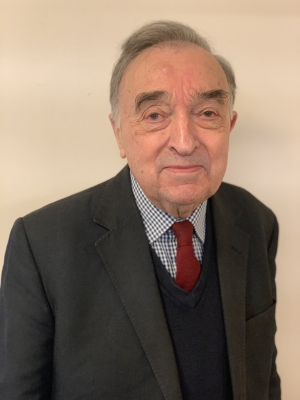 Christopher Robinson was born in 1936 and educated at Rugby and Christ Church, Oxford, where he was Organ Scholar. After a period as Organist and Master of the Choristers at Worcester Cathedral from 1963-75, he moved to St George’s Chapel, Windsor Castle, where he was Organist and Choirmaster until 1991, when he succeeded George Guest as Director of Music at St John’s College. He was conductor of the Oxford Bach Choir from 1976 to 1997 and of the City of Birmingham Choir from 1964 to 2002. As well as conducting most of the large-choir repertoire with the City of Birmingham Choir, there were also concerts of special note. For example, Christopher Robinson’s expertise in and affinity for Elgar’s music produced several highly praised performances of The Dream of Gerontius. In 1981 he conducted Messiaen’s La Transfiguration de Notre Seigneur Jesus Christ and in 1989 two highly acclaimed performances of Tippett’s Mask of Time. The Choir gave a widely praised first performance in England of The Jacobite Rising by Sir Peter Maxwell Davies.

He holds honorary degrees from Birmingham University and the University of Central England and is an honorary member of the Royal Academy of Music. He has been Chairman of the Elgar Society and President of the Royal College of Organists. In 1992 the Queen bestowed on him the honour of Commander of the Victorian Order for his services at Windsor Castle, and in the summer of 2002, the Archbishop of Canterbury made him a Lambeth DMus. He became an Honorary Fellow of the Guild of Church Musicians in Autumn 2003 and received a CBE in the 2004 New Year’s Honours List. Since retirement in 2003 he has continued to be active as a conductor, composer, keyboard player and mentor to young musicians. In 2006 he was Acting Director of Music at Clare College and from 2015-17 was Mentor to the Organ Scholars at Downing College. In 2019 he continued to work with various college choirs, including Queens’, King’s and Caius. He was Interim Associate Director of Music at King’s during the Hilary Term and Acting Precentor at Caius in the Easter.

"I aimed for an earthier sound, and tried to bring out the fun and the passion."

What I value most of all is expressive phrasing.