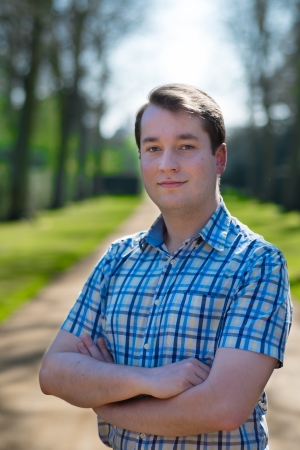 Born in Suffolk in 1994, Glen’s formative musical experiences were centred around the English choral tradition – as a chorister in St Mary’s, Bury St Edmunds and later in the choirs of St Edmundsbury Cathedral. Organ lessons with Michael Nicholas led to his being awarded a scholarship as a répétiteur to study at the Purcell School of Music. During this time Glen performed in all the major concert halls of London as a soloist and chamber musician on the organ and piano, and also conducted at the Wigmore Hall.

In 2013, Glen was appointed Organ Scholar at St George’s Chapel, Windsor Castle. In this role he took a share in accompanying and directing the choir’s daily services and assisted in the training of the choristers; he played for events attended by the British Royal Family.

Alongside his organ studies with Ann Elise Smoot he maintained a varied performance profile as organist, conductor and tenor.

During the academic year 2014/15 he resided in the Netherlands and was the Assistant Organist of St Nicholas’s Basilica, Amsterdam. Under the mentorship of Michael Hedley, Glen accompanied the majority of the choral services in the Basilica, as well as having responsibility for conducting the Basilica’s various choirs and ensembles. During this time he studied with Jacques van Oortmerssen.

Glen then spent four years as Organ Scholar at St John’s College, Cambridge under Andrew Nethsingha, where he accompanied the Choir in the daily services, as well as for its busy schedule of tours, broadcasts and recordings; he also assisted in the training of the Choir. Gordon Stewart and Ann Elise Smoot were his organ teachers. Glen’s interest in contemporary music has been developed through premiering several choir and organ, and solo organ works at St John’s College, including a three-year collaboration with Michael Finnissy. After graduation Glen took up the roles of Assistant Director of Music at Ely Cathedral and Organist at King’s Ely, where he plays the famous 1908 Harrison and Harrison organ, directs the Ely Cathedral Octagon Singers and teaches the boy choristers and pupils at the school. He is also active as a freelance organist, conductor and teacher.

END_OF_DOCUMENT_TOKEN_TO_BE_REPLACED
Nethsingha is his own man and absolutely his own musician, which is why his choir continues to evolve and lead