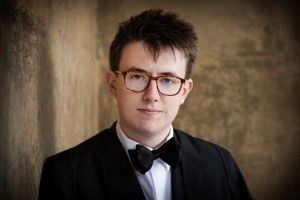 James Anderson-Besant is currently the Assistant Organist at St John’s, having completed three years as Organ Scholar while studying for a degree in Music, in which he graduated with a double starred first. In his role as Assistant Organist he accompanies the Choir in its daily round of services, regular broadcasts, recordings and tours under the direction of Andrew Nethsingha, and also assists in the training of the choristers. James has broadcast live on BBC Radio 3 and Radio 4, and his playing for the Choir appears on the recent releases Pious Anthems & Voluntaries, Ash Wednesday, and Advent Live – Volume 2. This year he is also supervising Cambridge music students in counterpoint and keyboard skills.

James also enjoys conducting, having organised and directed performances of Bach’s Christmas Oratorio in 2019 and St John Passion in 2020. He has also directed the St John’s Sinfonia in a Bach Cantata evensong. James recently gave organ recitals at King’s, Queens’ and St John’s Colleges as well as Truro and St Albans Cathedrals, and looks forward to upcoming engagements at Stockholm Cathedral and Trinity College, Cambridge. He won second prize at the 2019 Northern Ireland International Organ Competition, and was also Organ Scholar for the Charles Wood Summer School and Festival in Armagh, giving him the opportunity to work under David Hill and Philip Scriven.

James was a pupil at Abingdon School, and in his final year was Organ Scholar of the Cathedral Singers of Christ Church, Oxford. He spent his gap year as Organ Scholar at Gloucester Cathedral, which was especially exciting due to the addition of the first ever girl choristers in the cathedral’s history.

For seven years James learned the organ with James Brown, and he now studies with Stephen Farr. In September 2021, he will become Assistant Director of Music at Exeter Cathedral.

END_OF_DOCUMENT_TOKEN_TO_BE_REPLACED
Nethsingha is his own man and absolutely his own musician, which is why his choir continues to evolve and lead