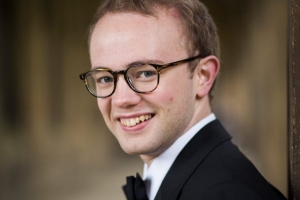 Joseph graduated from Cambridge with a degree in Music in 2016, during which he completed his FRCO and was awarded the prestigious Limpus Prize. He served a fourth year at St John's as Assistant Organist following three years as Organ Scholar whilst also directing 'The Gentlemen of St John's'. He spent a gap year as Organ Scholar of Hereford Cathedral, and before this was a Walter Stanton Music Scholar and the Sixth Form Organ Scholar at Lancing College. He began his musical education as a Chorister, later Bishop’s (Head) Chorister, of Salisbury Cathedral. Joseph began the organ ten years ago, and has been taught by Neil Cox, Stephen Farr and Daniel Cook, now continuing to study with Gordon Stewart. Joseph's recent recital venues include King’s, Queen’s and St John’s Colleges, Cambridge, Hereford and Wells Cathedrals and Westminster Abbey.

Joseph played a large proportion of the world famous Choir of St John’s College’s daily services, and also accompanied them on their busy broadcast, recording and international tour schedules, most recently to Germany and France. Joseph’s ultimate ambition is to be a Cathedral organist and Director of Music, and has recently discovered a passion for choral conducting. He conducted the College Choir regularly, and has to date conducted The Trinity Consort in a performance of James MacMillan’s Miserere, as well as the Beaufort Consort which will be performing Macmillan's Seven Last Words From The Cross.

In addition, Joseph remains as committed as possible to singing, and was taught by David Lowe in Cambridge. He is a graduate of the prestigious Genesis Sixteen, a training scheme run by internationally renowned choir The Sixteen and its director Harry Christophers. Joseph sings with The Gesualdo Six, who are fast becoming well regarded across the country.

Joseph took the post of Assistant Director of Music at Truro Cathedral in September 2017.

His concerts are advertised at www.organrecitals.com and on his own website at www.joseph-wicks.co.uk.

END_OF_DOCUMENT_TOKEN_TO_BE_REPLACED
The contribution of Andrew Nethsingha and St John's College, Cambridge to the Evensong tradition - both in the chapel and on record - deserves great praise