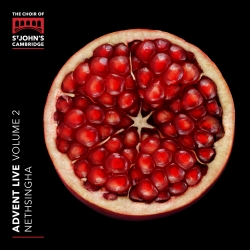 This album includes many staples of the Advent repertoire, including Otto Goldschmitt's A tender shoot, a piece which features at the start of our Advent services each year as well as on our first commercial recording in 1958, Hear my prayer.

Since 2008, Andrew Nethsingha began the practice of commissioning a new work for each Advent service, which has been made possible by a generous donation by an anonymous donor. This album features four of those commissions: Gabriel Jackson's Vox clara ecce intonat (2013), Cecilia McDowall's A Prayer to St John the Baptist (2018), Judith Bingham's An Introduction to Hark, the glad sound (2019), and the first commission in the annual series, John McCabe's The last and greatest Herald.

Our first Advent Live album was released in October 2018.

Throughout the disc, the performances are uniformly excellent and the recording(s)... give a fine representation of Advent Sunday in St John’s College Chapel

It is a real album, the mystery and expectation of Advent coursing through a repertoire that never stoops below this ensemble's judicious idea of what constitutes high-quality music, whatever the century... The qualities of the choir hardly need repeating

This is a fresh, stimulating holiday season program that should have a life far beyond the year 2020 when it was released

The fantastic balance of anthems, hymns and organ music leaps out in this arresting, fabulously performed Advent programme

Highlights? So many: Howells' 'A Spotless Rose' glows internally, ceding to the spicy organ that initiates Cecilia McDowall's spicy 'A Prayer to St John the Baptist' (commissioned by the choir for the 2018 service). Listen out for the keening soprano saxophone (Ignacio Mañá Mesas) in Gabriel Jackson's 'Vox clara ecce intonat'

There's some amazing stuff in this album... [of the Bingham] I think this is absolutely thrilling

I found the variety and spiritual power of the music on volume two even more convincing than that of volume one, and I suspect it will become a regular part of my personal Advent celebrations in future years

END_OF_DOCUMENT_TOKEN_TO_BE_REPLACED
Nethsingha is his own man and absolutely his own musician, which is why his choir continues to evolve and lead