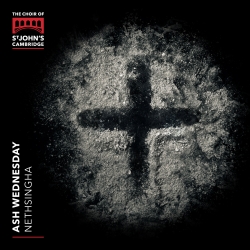 Ash Wednesday is the first album on the 'St John's Cambridge' label to present a live service broadcast in its entirety. The album features our 2019 Ash Wednesday Evensong, in which we performed the Preces and Responses and Ne irascaris by Byrd, Thomas Weelkes' The Short Service, J.S. Bach's Organ Prelude in E Minor BVW 548i, and Gregorio Allegri's Miserere Mei, Deus. This music is interspersed with the spoken elements of Evensong, including the two 'Lessons' from the Old and New Testaments of the Bible.

Evensong on Ash Wednesday marks the penitential season of Lent. The service is a highlight of the Choir's year, and it has been broadcast regularly by the BBC since 1972.

The Organ Scholar performing on this album is James Anderson-Besant, who has also written the programme notes for this album (available to read from the Download CD Booklet button above).

It's the most glorious music-making

★★★★★ This CD captures perfectly the special atmosphere... it's as if the live occasion spurs them on to even greater heights

The malleable, sensitive trebles have what seems to me an unparalleled ability to invest text and phrase with meaning

Above all, the 'Miserere mei, Deus' by Allegri and Byrd's overwhelming motet 'Ne Irascaris, Domine' get under the skin, as indeed does Johann Sebastian Bach's 'Prelude in E minor', heard at the end

★★★★ This disc has a transportive quality. The choir moves as one, with stunning top tenor lines. Glistening and ethereal throughout

The audio quality is excellent...some outstanding singing, especially from the trebles...this is a pleasant listen and yet again Director Andrew Nethsingha has got some beautiful singing from this choir. If you want to hear how good an Anglican Ash Wednesday service can sound this release will show you

END_OF_DOCUMENT_TOKEN_TO_BE_REPLACED
Nethsingha is his own man and absolutely his own musician, which is why his choir continues to evolve and lead