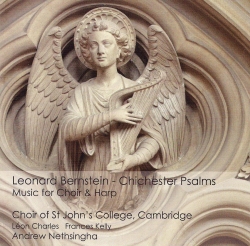 The recording takes as its tagline 'Music for Choir and Harp' and at its core are three substantial works: Bernstein's Chichester Psalms in its 'chamber' version for choir, organ, harp and percussion; a setting of the Lord's Prayer by Leoš Janáček, Otčenáš; and A Ceremony of Carols by Benjamin Britten, in its arrangement by Julian Harrison for SATB, rather than the original version with three treble parts.

The polished sound of the Choir of St John's College, Cambridge (including some very accomplished treble soloists) under the meticulous direction of Andrew Nethsingha.

The Choir sounds on good form under Andrew Nethsingha's direction...well supported by the organist Léon Charles and harpist Frances Kelly...The treble solo is nicely poised at the start of the second movement [of the Bernstein] and the violent eruption ('Why do the nations rage')...is suitably crisp and aggressive...This St John's performance [of the Britten] is as good as it's going to get... It's well recorded, with sound that has real impact at the same time as putting plenty of space around the voices.

END_OF_DOCUMENT_TOKEN_TO_BE_REPLACED
Nethsingha is his own man and absolutely his own musician, which is why his choir continues to evolve and lead