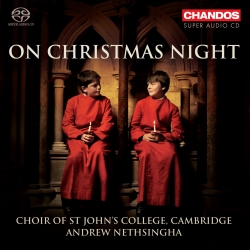 Recording of the Week
Presto Classical

In the run-up to Advent and Christmas 2011, St John's College's Quincentenary, the Choir has launched a joyous celebration of music for the festive season. The disc includes original works by John Rutter, Sir Richard Rodney Bennett, Elizabeth Poston, and Kenneth Leighton. These are complemented by arrangements of popular carols, and a selection of congregational hymns, all displaying strong ties to the Advent and Christmas seasons.

This album was recorded in the College Chapel in full surround-sound, which means that it not only sounds spectacular, but recreates to a spectacular degree the experience of listening to the Choir perform in the Chapel.

The collective vocal heft of the ensemble's young choral scholars remains a potent weapon under Andrew Nethsingha's direction ... Words, their colour and meaning, emerge as essential shaping forces in these engaging performances. This release stands out thanks to the commitment to quality and high artistic values shown here by St John's College Choir and Chandos ... Ingenious in their phrasing and crystal clear in articulation ... the choir allows the music to breathe naturally and etch the text with captivating light and shade.

Chandos engineering casts a luminescent glow round these excellent performances...There's quite a bit of less familiar repertoire here and old favourites emerge all the fresher for being sung by young, enthusiastic voices under Andrew Nethsingha's incisive direction.

It is to England we go for the finest 'cathedral' Christmas disc of the year...Blessed with a particularly homogeneous and secure line-up of trebles.

I was struck by the choir's texture and balance with a fine body of tone. Most of all, their sensitivity to the meaning of the text is above reproach.

The singing on this disc is very fine indeed. Solos are well taken and the choir as a group blends extremely well and sings with excellent tone and great clarity. The college's Senior Organ Scholar, John Challenger, does a marvellous job.

END_OF_DOCUMENT_TOKEN_TO_BE_REPLACED
Nethsingha is his own man and absolutely his own musician, which is why his choir continues to evolve and lead