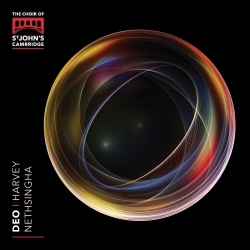 CD of the Month
Choir & Organ

The Choir presents an award-winning recording of sacred works by Jonathan Harvey - a composer with close associations with St John's, having studied there and been awarded an Honorary Fellowship.

Alongside Toccata for Organ and Tape and the organ solo Laus Deo, the recording also features the popular anthems Come, Holy Ghost, I love the Lord and two works, The Annunciation and The Royal Banners, written especially for the choir.

The disc received a BBC Music Magazine Award in the Choral category in 2017 and has received much critical acclaim.

★★★★★ ecstatic... richly challenging... The Choir tackles it all with confidence and clarity

a terrific disc... These are performances to treasure, of great intensity and remarkable power

The Choir of St John’s College, Cambridge, has done one of its old boys proud... ambition has paid off handsomely... the music on this disc is so varied and inspiring

Andrew Nethsingha and the St John’s forces have this often-challenging repertoire well under control, delivering characterful yet authoritative performances of which they can be justly proud

CD of the Month, Choir & Organ

No choir performs these works better than St. John’s, which sings with the intensity, commitment, and, under music director Andrew Nethsingha, attention to detail that Harvey requires

END_OF_DOCUMENT_TOKEN_TO_BE_REPLACED
Nethsingha is his own man and absolutely his own musician, which is why his choir continues to evolve and lead