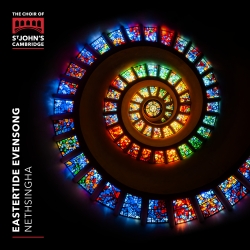 Eastertide Evensong is the second live Evensong album released by the Choir following the success of Ash Wednesday. Evensong is the foundation of our output, as we sing six Evensong services per week throughout term time. The recording is structured in a traditional Evensong format, including anthems, psalms, canticles, prayers, bible readings and organ music.

Andrew Nethsingha says of the project:

"I’ve been involved in making music for around 10,000 Evensongs in my lifetime so far! This service from 2018 sticks in my mind as being particularly special. There was a great frisson and sense of occasion - having hundreds of thousands listening live on the radio will have helped! Evensong provides a timeless framework for music of many periods - here we include a wonderful variety from the 16th century to the present day.

“As time goes on, I become more and more keen on live recordings - I love being able to prepare repertoire really thoroughly, so that the music sits very comfortably in people’s voices. Then the BBC red light comes on and one has the confidence to be spontaneous, take risks and create a unique performance. That is harder to achieve in studio conditions with multiple takes. The singers on this recording were a particularly fine group. One of the altos, for instance, went on to win the Kathleen Ferrier Award a couple of years later.

“I’m keen to share my great love for the beauty of Evensong and the powerful effect it can have on all people - religious believers and non-believers alike.”

This recording opens with Julian Anderson’s My beloved spake, a work written in 2006 using text from the Song of Songs which is particularly apt for Spring and for Eastertide. Psalm chants by John Goss, Charles Hylton Stewart and Charles Villiers Stanford are performed in the Eastertide service, chosen by Nethsingha for being “masters of their craft”. A particular highlight of the album is the inclusion of Herbert Howells’ Gloucester Service setting of the Magnificat and Nunc Dimittis which was written in 1946, shortly after Howells had served as Acting Organist at St John’s during the war.

Towards the end of the service, we hear John Taverner’s Dum transisset Sabbatum, set to a text of the same name which was originally prescribed to be sung every day during Easter Week. We hear Taverner’s first setting of this text (he later composed a second) which was written in the early 16th century and spans three octaves within a five-part polyphonic texture. The service also includes Preces and Responses composed by Kenneth Leighton and concludes with the Finale for solo organ from Charles-Marie Widor’s Symphonie No. 6, performed by James Anderson-Besant and which Nethsingha refers to as “one of the most exuberant works in the repertoire”.

The album includes booklet notes written by Andrew Nethsingha, reflecting on the significance of Evensong and the works included in this recording.

★★★★★ The results are extremely fine, with much attention to musical detail, clear diction, impeccable tuning and a well-balanced choral blend

Nethsingha is his own man and absolutely his own musician, which is why his choir continues to evolve and lead

For all devotees of choral evensong, this is an indispensible disc... [Of the Howells] altogether these are first rate performances and the choir's commitment to word and meaning are wonderfully ardent

★★★★ Performance ★★★★ Recording - Any hint of the routine... is immediately dissipated in a rapt rendition of Julian Anderson's 'My beloved spake'. Thrumming staccato accents on the word 'speaking' and a tingling crescendo on 'Arise', are just two of the subtleties Nethsingha elicits, and the feeling of tentative emergency from a long-endured winter is grippingly captured

The voices blend in a way which combines vibrancy with a well-blended ensemble. The accompanying CD booklet is a model of production with some glorious images of stained-glass windows

END_OF_DOCUMENT_TOKEN_TO_BE_REPLACED
Nethsingha is his own man and absolutely his own musician, which is why his choir continues to evolve and lead