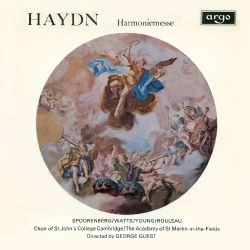 This album was selected for the 1966 Gramophone 'Critics' Choice'.

A triumphant account of Haydn's 'Harmoniemesse'...This is one of the glories of Haydn's old age and the performance... reveals in all its splendour

Splendid singing with bright, forthright treble tone from the choir

END_OF_DOCUMENT_TOKEN_TO_BE_REPLACED
Nethsingha is his own man and absolutely his own musician, which is why his choir continues to evolve and lead