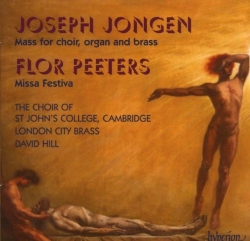 The Choir of St John’s College, Cambridge is experiencing another vintage year of musical and vocal excellence. In this latest CD for Hyperion, its trademark sound, immaculate yet energetic and joyful, is employed in the service of a fascinating selection of sacred choral works from the twentieth century. Joseph Jongen brought his vast array of musical influences to the European sacred music tradition, creating works of unrestrained lyrical and melodic power which nevertheless illustrate the liturgical texts with reverence. Jongen’s Messe en l’honneur du Saint-Sacrement is a major work on a large scale, richly contrapuntal, interwoven throughout with plainsong melodies expertly manipulated, harmonically vivid and original. It is scored for brass and organ accompaniment reminiscent of Gabrieli and its sumptuous texture is perfectly captured here in the famous resonant acoustic of the chapel. Flor Peeters’ Missa Festiva is a similarly vibrant and enjoyable work. Also recorded here, demonstrating the considerable individual talents of St John’s soloists, are three of Jongen’s sacred solo motets, each written for specific personal occasions, sensitively scored and imbued with emotional sincerity.

Effective and forceful performances…I particularly enjoyed the more intimate textures at the end of the Peeters' Agnus Dei. The few extra solo items, featuring Tom Gould on the violin, are charming too.

David Hill is to be congratulated for exploring this unfamiliar repertoire and then presenting it in such confident performances.

This is a wonderful disc bringing a collection of rarely heard, let alone recorded, devotional works to light…[Messe en l'honneur du Saint-Sacrement] is an engaging work…subtle both in the strains of variety within and the expressive power the music adds to the text…Jongen's motet on 1895, Pie Jesu, shows treble Alexander Robarts on angelic form set against the organ…The Choir of St John's College Cambridge under David Hill are on terrific form. London City Brass know how to bring off a good flourish when they see one, while organist Paul Provost works tirelessly throughout to provide the backbone of musical thought on a disc much worth your while.

The choir is in fine fettle here: the sound is focused and well integrated top to bottom and it can bring forth huge climaxes and truly soft passagework equally well. With such forces at his disposal, Hill can bring out the considerable nuances in the piece…I cannot imagine it being better done than here.

END_OF_DOCUMENT_TOKEN_TO_BE_REPLACED
Nethsingha is his own man and absolutely his own musician, which is why his choir continues to evolve and lead