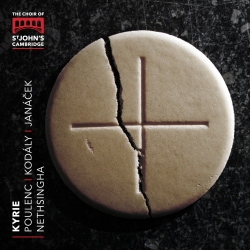 The three works were written in the context of the traumatic first half of the 20th Century; indeed Kodály's Mass was premiered in the city of Budapest whist it was under siege. Despite all three composers experiencing life-defining moments of loss, each has used their unique musical characters to produce music rich in a variety of colours and textures. To hear more about the music of the disc, watch the interview with our Director Andrew Nethsingha below.

The album is available to order now. It was released Friday, 15th September 2017.

Another worthwhile disc from this top collegiate choir

Sung with characteristic “European” ripeness of tone and precision

There is a transparency, delicacy and clarity to the textures on this disc

The results make for rewarding and thought-provoking listening

END_OF_DOCUMENT_TOKEN_TO_BE_REPLACED
Nethsingha is his own man and absolutely his own musician, which is why his choir continues to evolve and lead