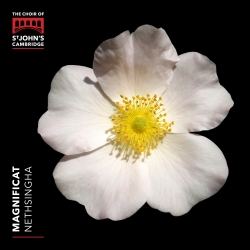 In our first ever album dedicated solely to the Evening Canticles (Magnificat and Nunc Dimittis), we have released Magnificat.

The album contains six contrasting settings of the Evening Canticles, repertoire that plays an important role in the Choir’s daily music-making. Each of the settings chosen by Director of Music Andrew Nethsingha has personal significance to his musical life – his time at the Royal College of Music, Truro Cathedral, Gloucester Cathedral, and now, St John’s College.

Of the Canticles relating to the College itself, Kenneth Leighton’s Second Service was composed in 1972 in memory of Brian Runnett, a former St John’s College Organ Scholar, who was tragically killed in a car crash driving home from an organ recital. Nethsingha himself commissioned Jackson’s Truro Service, in memory of a former chorister at Truro Cathedral. Former Director of Music at St John’s College, Dr George Guest, commissioned Tippett’s St John’s Service to celebrate the 450th anniversary of the College in 1961.

This album explores the breadth of imagination with which composers have approached these enduring texts, which have been said or sung at daily acts of Christian worship for over a thousand years. Stanford took his compositional starting point from the Germanic symphonic tradition; Howells took his inspiration from the architecture and acoustics of the Cathedral in Gloucester; Tippett was inspired by the unique Spanish trumpet stop on the organ at St John’s College.

"This disc was recorded at a time when we had an especially fine group of singers. I think it is one of my two best recordings so far!

I am fascinated by the way in which the same texts can provoke profoundly different responses from composers. All six pieces are works which the singers have lived with for many years – and for many decades in my case! It is music with which we feel a deep emotional connection. I am excited to share this very fine repertoire with the wider musical world!"

We also hear a choir that sings with extreme perception of blend (vowel and timbre), words and phrasing; a true ensemble that understands how a legato might be intensified or slackened, how a colour can be shaded and twisted and how to react to an organ however it’s throttled

★★★★★ Nethsingha and his St John’s forces lead us through a fascinating hour’s music, not least for recognising how different each composer’s response to the same text can be

Stanford - Magnificat in A - The Choir of St John's

Andrew Nethsingha on 'Magnificat' - The Choir of St John's

END_OF_DOCUMENT_TOKEN_TO_BE_REPLACED
Nethsingha is his own man and absolutely his own musician, which is why his choir continues to evolve and lead