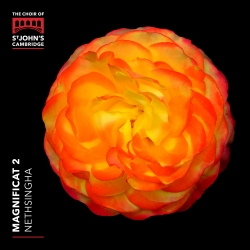 The nine settings of Magnificat and Nunc Dimittis featured on Magnificat 2 fall into two groups - four by celebrated Organist-Composers, written between 1932 and 1952, and four by non-church musicians from 1974-1989. The recording culminates with a contemporary setting by Julian Anderson, composed for the 150th anniversary of St John’s Chapel, a neat follow-on from the previous album’s final track of canticles by Michael Tippett, commissioned for the College’s 450th anniversary.

The aim of the recording is to compare the varied ways in which composers have created musical form out of these timeless texts, and Andrew Nethsingha has selected these choices due to a variety of links between them. These include notable clergymen-commissioners of the mid-twentieth century; Christ Church, Oxford as the place Walton was chorister, Watson was Organist and for which Swayne composed Magnificat I; and French influences for both the works by Berkeley and Anderson.

This album follows the first volume of Magnificat and Nunc Dimittis settings, titled simply Magnificat, released in 2019. This first volume was given five stars by Choir & Organ, and The Observer called it ‘inventive and brilliant’. The two volumes are designed to compliment one another, with the first in the series starting earlier (Stanford, 1880s) and the second bringing the listener up to the present day. Volume One was ‘Editor’s Choice’ in Gramophone.

“I am very excited to be releasing this disc, especially at a time when the choir has been unable to sing to a public congregation for over a year. I think it is perhaps the best recording the choir and I have made during my first 14 years at St John’s. This is music which we live with day by day, and interpretations deepen over time. I am keen to share this fine repertoire with others. It fascinates me how the two texts, Magnificat and Nunc Dimittis, can provoke such varied responses from composers.”

“I was enormously excited to be invited to compose my Evening Canticles for Andrew Nethsingha and the Choir of St John’s College, Cambridge. I want to thank all the performers for giving the work such a splendid launch, and for the magnificent recording on this CD. The work is dedicated to Andrew Nethsingha.”

The album includes illuminating booklet notes, featuring an introduction from former Archbishop of Canterbury Dr Rowan Williams, alongside Andrew Nethsingha’s conductor reflections and a note from Julian Anderson, with scans of the original manuscripts of the works. This is thought to be the first time that all of these manuscripts have been published. The booklet can be viewed below.

The contribution of Andrew Nethsingha and St John's College, Cambridge to the Evensong tradition - both in the chapel and on record - deservices great praise; another fascinating album

They're on cracking form right now... there's that sort of earthy ferocity that is totally exhilarating... the control, the pianissimo and the clarity this recording brings is magnificent

★★★★★ From the very first moments of this superb recording, it is apparent that the Choir of St John's College, Cambridge has taken this largely familiar repertoire and made it new, treating the texts of the Magnificat and Nunc Dimittis as though no one had ever sung them before, and relishing the hugely different styles of each setting

These are inspirational performances, music wonderfully shaped and words unfailingly invested with meaning

Throughout, the choir exhibits its customary impeccable intonation, but its emotional power derives more from the uninhibited expressions of so wide a range of musical styles and idioms. The treble soloists in particular are wonderful, as indeed are the organists. This is a terrific disc.

This is a wide-ranging and highly stimulating collection of settings... The St John’s choir is one of the UK’s leading collegiate choirs and this latest recording shows them on top form

The introductory essay by former Archbishop of Canterbury, Dr Rowan Williams, speaks of “these ancient hymns, so redolent of continuities yet so full of radical surprise,” words true both of the canticles and of this absorbing treasury, impeccably performed by St John’s College Cambridge Choir under the direction of Andrew Nethsingha

Nethsingha asks a lot of his 33 singers in terms of nuance and dynamic contrast – far more than most collegiate choirs are capable of – and their corporate virtuosity is palpable… Add in Rowan Williams’s absorbing booklet essay on the theological background to the Magnificat and Nunc Dimittis texts and Nethsingha’s penetrating notes on the music, and you have a package that no lover of the Anglican choral tradition will want to miss

As with other Signum classics recordings of the St John’s College Cambridge choir, this comes packed to the rafters with outstanding supporting documentation. Beyond a thoughtful essay from Rowan Williams, formerly Archbishop of Canterbury, there is a scholarly, but eminently readable, work-by-work analysis of each of the settings, penned by Nethsingha himself, with fascinating insight into the composers, intriguing photographs and manuscript facsimiles, and fascinating connections drawn between them

Magnificat 2: An Introduction with Andrew Nethsingha

'Magnificat 2' - A discussion with Giles Swayne

END_OF_DOCUMENT_TOKEN_TO_BE_REPLACED
Nethsingha is his own man and absolutely his own musician, which is why his choir continues to evolve and lead