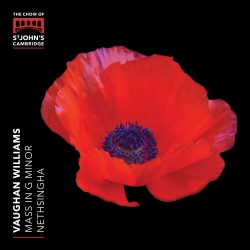 Mass in G minor is the fifth album of music on our 'St John's Cambridge' record label with Signum Records, featuring music by Ralph Vaughan Williams.

The disc has received critical acclaim, receiving favourable reviews in BBC Radio 3 Record Review, MusicWeb International, and The Guardian and 5*s from BBC Music Magazine - where it was also Choral disc of the month - Choir & Organ and Planet Hugill. It has been included on Spotify's "Classical New Releases" Playlist and Gramophone's 'The Listening Room' playlist.

On the day we launched the album, our service of Choral Evensong was video broadcast live by Classic FM on Facebook. This was a first for both the Choir and Classic FM, and we believe that it is the first time that any collegiate or cathedral choir has live-streamed Evensong on social media. Whist live we received 32,000 views, and thousands more have since watched the service (see below).

The boys are evidently in fine form. The solos well-taken by all voices throughout... An outstanding disc of choral Vaughan Williams

['Mass in G Minor' and 'Lord, thou hast been our refuge'] are two almost opposing examples of the still underestimated choral genius of Vaughan Williams, to which the Choir of St John’s College, with their dedication and clarity, truly do justice

★★★★★ Clean lines, rounded tone and a near perfect balance of voices

I’ve included Vaughan Williams’s virtuoso 'Lord, Thou has been our refuge' which cleverly laminates two great melodies together using the words of Psalm 90 in two versions: the tune for O God, our help in ages past stealing in with extraordinary and understated power

This is a very fine disc indeed. Andrew Nethsingha has chosen the music with great discernment and conducts it with evident commitment and understanding. The choir sings marvellously from start to finish

The choral recordings that St John’s College Choir have released on this label so far have been uniformly excellent, and this is another golden string to add to their bow.

★★★★★ The choir is in very fine form indeed, giving us some lovely elegant lines and delicate textures, yet also moments of great power and intensity. This is a very dynamic performance, as they follow Nethsingha's fluid direction

No sound? Try un-muting the audio on the video window

The disc was accompanied by Joseph Wicks – now the Assistant Director of Music at Truro Cathedral – on the organ. It also features trumpeter David Blackadder(link is external), who performed in the majestic 'Lord, thou hast been our refuge.' We were delighted to hear that David would be performing at the Royal Wedding of Prince Harry and Meghan Markle(link is external) the day after the release.

The sleeve notes for the disc are written by Dr Ceri Owen(link is external), a research fellow at Sidney Sussex College, Cambridge, whose research is concerned with late nineteenth- and early twentieth-century British music and musical culture. Ceri gave a short lecture recital after Evensong on launch day, which included two Vaughan Williams songs – sung by current Gentlemen of the Choir James Adams and James Quilligan – that she accompanied.

END_OF_DOCUMENT_TOKEN_TO_BE_REPLACED
Nethsingha is his own man and absolutely his own musician, which is why his choir continues to evolve and lead