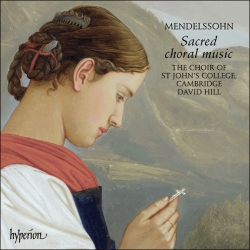 Nowhere is Mendelssohn’s creative psyche more poignantly exposed than in his choral works. His desire to create music rewarding for performers and listeners alike is everywhere apparent, as is his always mellifluous and gracious vocal writing. Most endearing of all are Mendelssohn’s worlds of dream-like contentment, which cocoon the listener in a web of enchanted idealism. Hör mein Bitten (Hear my prayer) is the most popular of his small-scale choral works and was composed during Mendelssohn’s eighth visit to England in 1844, just before he began putting the finishing touches to his E minor Violin Concerto. The piece conjures up the feelings of peace and contentment in the flowing melodic lines of the inimitable ‘O for the wings of a dove’, which is also on this disc in its famous English adaptation. All of these sacred works are radiantly performed by The Choir of St John’s College, Cambridge under David Hill in the first of a new series of recordings on the Hyperion label. The treble soloist is the stunning Quintin Beer who featured in a BBC Radio 4 documentary about Allegri’s famous Miserere.

I doubt that you would find a better performance of Mendelssohn's sacred choral music than this. Finely executed with immaculate phrasing sensitively performed, it is clear that David Hill is leading the choir of St John's to even greater heights while it maintains its own highly individual sound. The whole production is worthy of the highest praise.

...some lovely - indeed memorable - performances here; including a gorgeous account of Mendelssohn's richly opulent Ave Maria, Op 23 no 2 (Allan Clayton the wonderfully yearning tenor soloist) and a gloriously magisterial Warum toben die Heiden from Op. 78 ... Quentin Beer is an impressively clear and pure-voiced treble in that most famous of all treble solos - 'O, for the wings of a dove'...The recording is a triumph. Hyperion has come up with a far more rewarding sound than either Decca or Naxos was ever able to achieve at St John's.

This is one special record.

The Choir of St John's College, Cambridge, under David Hill, simply outsings all the current competition in sacred music by Mendelssohn.

END_OF_DOCUMENT_TOKEN_TO_BE_REPLACED
Nethsingha is his own man and absolutely his own musician, which is why his choir continues to evolve and lead