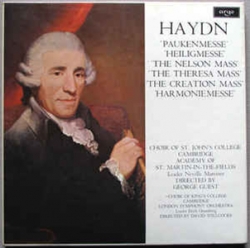 As a result of this recording the following letter was sent to the Dean of St John's (the Revd S. W. Sykes) by Robert Armstrong (Secretary to the Prime Minister):

END_OF_DOCUMENT_TOKEN_TO_BE_REPLACED
Nethsingha is his own man and absolutely his own musician, which is why his choir continues to evolve and lead