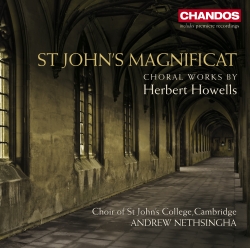 This recording heralds the beginning of an exclusive recording contract between Chandos and the Choir of St John’s College, Cambridge. All performances will be conducted by Andrew Nethsingha, the Choir’s Director of Music since 2007.

The disc of choral music by Herbert Howells includes two settings of the Magnificat and Nunc Dimittis: one setting was written for St John’s, where Howells was Acting Organist during World War II; the other for Gloucester Cathedral in the composer’s native county.

Andrew Nethsingha said, “We are delighted to be embarking on a partnership with such an excellent label as Chandos. With them, we will release a wide variety of repertoire. We have chosen to start with a disc of Howells’ music – Herbert Howells was closely associated with St John’s College for several decades. Two major works written for the St John’s Choir, including Sequence for St Michael will feature on the CD. The recording of By the waters of Babylon, a deeply moving psalm setting for baritone, violin, cello and organ will be another highlight of the disc.”

This is St John’s College Choir’s first long-term contract with Chandos. However, it has already made a number of recordings for the label, including Mozart’s Requiem and works by Charpentier and Poulenc (conducted by George Guest) and music by Tallis and Gibbons (conducted by Christopher Robinson).

★★★★★ Performance ★★★★★ Recording: If you are at all interested in Howell’s church music this disc is an obligatory purchase... Here the emotion of the music feelingly and unapologetically wells upward to the surface, making raw and immediate spiritual impetus of Howell’s writing

★★★★★ There is musicianship here of a rare and moving kind

★★★★★ The Choir of St John’s College under Andrew Nethsingha rises to the very considerable challenges of Howell’s writing – it takes a brave choir to negotitate some of this composer’s ‘un-cathedral’ harmonic progressions and have still have enough breath to get to the end of his seemingly endless, winding melodic lines. Diction is excellent, as is the dynamic contrast

Director Nethsingha has a sure touch with Howell’s unique idiom, drawing pleasing interpretations at every turn. Both vocal and instrumental soloists perform splendidly, as does the organist. Chandos delivers its usual pristine sound …” “The album is a revealing one-stop survey for people with little or no Howells in their collections; it further offers a number of rarities that many of the composer’s legion of devotees have probably never heard

Nethsingha clearly likes a robust choral sound, but never at the expense of clarity and musical sense; his 16 trebles can pack a considerable punch, especially with the weight of four countertenors, five tenors and six basses behind them. They need to, because something like the 'Sequence for St Michael' that opens the disc is not remotely dreamy or improvisatory but powerful and dramatic... At the opposite extreme, there are some exquisite miniatures in the anthology too"

END_OF_DOCUMENT_TOKEN_TO_BE_REPLACED
Nethsingha is his own man and absolutely his own musician, which is why his choir continues to evolve and lead