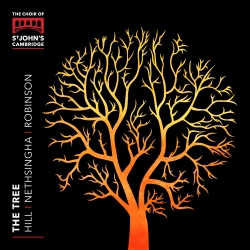 We celebrate the rich heritage of the choir through a new album The Tree, featuring live recordings from St John's College Chapel.

The album plays with the idea of growth, inspired by the tree described in the Book of Job, starting with the single treble line of Hildegard of Bingen's O pastor animarum before gradually adding organ, lower voices, a second choir, 150 additional singers, and finally combining nearly 500 voices together. The image of a tree sprouting new branches can be seen as a metaphor for revival in the wake of the pandemic, the textural growth of the music form a single melodic line reflecting the heritage of the choir itself.

Andrew Nethsingha, Director of Music, said “Several pieces on the album are directed by my predecessors, Christopher Robinson and David Hill. The album is released as a tribute to them, celebrating their 85th and 65th birthdays respectively. Some of my most moving and inspiring experiences in Cambridge have been watching them return to conduct the present choir. In an interview with Martin Cullingford for Gramophone fifteen years ago, David spoke of ‘a process of osmosis really. They pass on – in a way that they don’t even talk about, no one ever discusses it – a tradition of how to phrase, a tradition of how to sing a particular thing. Listen to the choir from 20 years ago, and go into the building now, and you will hear that they’re two Burgundies from the same valley, probably on the same chalk, but tasting slightly different.’ Well, I do talk about it to the choir, but in other respects I hope that what David said is still true! Alternatively, one might think of the choir itself as a tree, constantly growing new branches. My hope is that listeners might feel the ‘liveness’ of these archive recordings more than compensates for the lack of studio conditions. As I completed work on the album, pandemic restrictions only allowed us to sing services in an empty Chapel; we should never take for granted the joy of having a real (if occasionally noisy!) congregation with whom to share our music-making.”

Some works on the album are directed by past St John’s Directors of Music Christopher Robinson and David Hill and it features music by St John’s Composers including Robinson, Herbert Howells and Jonathan Harvey. The album also features sicut aquilae by James Long, one of the five works written for the College’s 500th anniversary. Nethsingha has paired these works with music by Elgar, Rowlands, Parry, Stainer and Stanford all dating from around the turn of the twentieth century.

All tracks on the album are taken from live services in the St John’s College Chapel, including an Evensong where the choir performed with Yale Schola Cantorum in addition to tracks from a special alumni service in 2019 where generations of former choir members came together to celebrate the 150th anniversary of the College Chapel. The album concludes with Love Divine, all loves excelling, sung by nearly 500 people including the choir, former choir members and the congregation.

‘A Song of Wisdom’, one of [Stanford’s] six Bible Songs, is given one of those performances to which you want to keep returning. It’s not just Andrew Nethsingha’s controlled shaping of musical paragraphs that attract the ear, it is the eager and exultant tone from the boys. They so obviously relish Stanford’s soaring lines and climaxes, none more thrilling than at ‘Come unto me’, the top B-flat resounding gloriously. For me, it’s the highlight of the disc.

This is another very fine album from the Choir of St John’s College, Cambridge. Though the performances were recorded over several years and at different services, the standard of singing – and organ playing – is consistent, which is to say excellent

★★★★★ The outstanding quality of the singing and playing is the reason to buy this recording. Even something as straightforward as Stanford's 'A song of Wisdom' is given a ravishing performance

Andrew Nethsingha is explicit in his eloquent booklet essay that this latest well-crafted and beautifully sung disc from the Choir of St John's College, Cambridge is about rebuilding 'after pandemic and political upheaval'

This listener is always pleased to hear Edward Elgar's 'The Spirit of the Lord', particularly when it is sung as well as it is here and likewise 'A Hymn for St Cecilia' by Herbert Howells is always a joy

The trebles make a splendid impact in Jonathan Harvey's 'The Tree', a piece glinting with light

Overall, the recording leaves the listener full of admiration for all aspects of this compilation, which is exceptionally well balanced technically. However, perhaps a medal should be awarded to the trebles for their highly sensitive and superb performance of Stanford's 'Song of Wisdom' which is, without doubt, one of the highlights of a most inspiring disc

END_OF_DOCUMENT_TOKEN_TO_BE_REPLACED
Nethsingha is his own man and absolutely his own musician, which is why his choir continues to evolve and lead