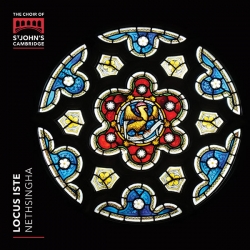 Locus Iste is the 100th recording by the Choir of St. John's College, Cambridge and marks the 150th anniversary of the consecration of St John's College Chapel.

The fifteen tracks reflect the past 150 years of choral music, carefully selected by Director of Music Andrew Nethsingha to mark each of the ten-year periods since the Chapel's Consecration in 1869.

Favourites of the Anglican choral tradition such as Finzi's 'God is Gone Up' and Parry's 'Blest pair of sirens' are joined by commissioned works by Giles Swayne and Alex Woolf, a former Music student at St John's. The Choir is also joined by cellist and current St John's College student Laura Van Der Heijden, who won the BBC Young Musician of the Year Competition in 2012.

Andrew Nethsingha, Director of Music, says: "We are excited to be releasing the choir’s 100th album, 60 years after the Choir’s first LP for the Argo label. This new recording celebrates 150 years since the consecration of the College Chapel and contains 15 contrasting pieces across that 150 year period.”

This disc really soars, startling the ear into ecstasy with the sudden release of Rachmaninov’s Cherubic Hymn, the ‘bright Seraphim’ of Parry’s Blest pair of sirens and the ‘triumphant shout’ of Finzi’s God is gone up... Hopefully it's a fanfare that will continue for another 150 years

The choir’s fine blend, admirable ensemble and attention to text is always on display, enhanced by the chapel’s celebrated acoustic

Beautifully recorded. If you enjoy choral music, this one is special

★★★★ A glint of sunlight, inspired and inspiring

The voices are tight and perfectly blended

There are some polished performances under Andrew Nethsingha's direction

The choir's very first chord gives a foretaste of great things to come, for the singers somewhow just melt into the music, with no sense of attach, but with sheer loveliness of tone and perfect balance of the voices

END_OF_DOCUMENT_TOKEN_TO_BE_REPLACED
Nethsingha is his own man and absolutely his own musician, which is why his choir continues to evolve and lead