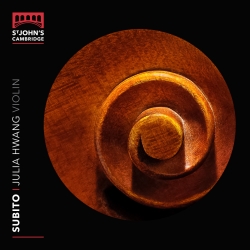 Subito – the debut album by violinist Julia Hwang with pianist Charles Matthews – was the first soloist album on the St John's Cambridge imprint with Signum Classics.

Julia, who was studying music at St John's at the time of the album's release, is already highly accomplished as a performer: she gave her professional solo début with the English National Baroque Orchestra at the age of nine, and has had numerous engagements with professional ensembles as well as on television and radio. Her instrument is a Peter Guarnerius of Mantua (c.1698) on generous loan from the Alderson Trust. In 2015, she was appointed to become a cultural ambassador for the BRACE Alzheimer’s Society, alongside broadcasters Jonathan Dimbleby and Martyn Lewis.

As her very first solo album, the recording is very important to Julia: “Subito presents a personal recital.  The individual pieces all reflect – in some part – my journey with the violin through adolescence, and it has been a real pleasure working with such an inspiring and supportive team.”

Julia has been supported by our Director Andrew Nethsingha throughout the project, and he is thrilled about the recording: “I will never forget the first time I heard the radiant playing of Julia Hwang (another Cliftonian, as it happens) and I am so grateful to the late Sir David Willcocks for having encouraged her to apply to study at St John’s.”

“It is my hope that this disc, released in the month of Julia’s graduation, will help catapult her – SUBITO! – onto her rightful place on the world’s stage.”

The disc was recorded at the Britten Studio in Snape Maltings, and it includes Grieg’s Violin Sonata No. 3 in C Minor, Vaughn Williams’ The Lark Ascending (which Julia performed as part of a BBC4 documentary on the nation’s favourite composition in 2012), Subito by Witold Lutosławski, and Wieniawski’s Fantasie brilliante sur des motifs de l’Opéra Faust de Gounod. The disc is accompanied by some fantastic music notes from Richard Bratby (the booklet also includes a Korean translation).

The appeal here, quite aside from some excellent playing, is in the way the programme has been planned… Julia Hwang is a model of expressive purity in the solo part [of The Lark Ascending] while Charles Matthews provides her with an appropriately stilled accompaniment

Hwang’s virtuosic spell dazzles with note-to-note precision and piercing clarity… This recording, then, is a winner for anyone interested not only in virtuosic violin playing in its various moods, but also in good playing generally

In all four works, Julia Hwang shows admirable poise and technical control, but most importantly she plays with remarkable maturity and charm so that more virtuoso pieces become far more than showpieces. An impressive and delightful debut 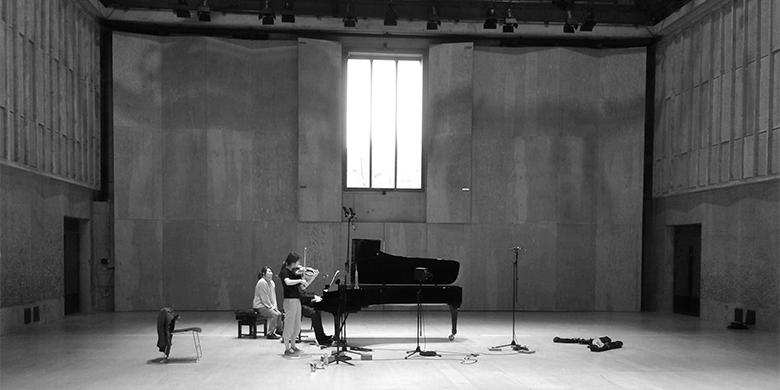 Julia and Charles during recording at Britten Studio in Snape Maltings, with Julia's mother page-turning

END_OF_DOCUMENT_TOKEN_TO_BE_REPLACED
Nethsingha is his own man and absolutely his own musician, which is why his choir continues to evolve and lead