Recorded on
/
Update Required To play the media you will need to either update your browser to a recent version or update your Flash plugin.

For this week's webcast of Choral Evensong, the college chapel welcomed the Choir of Gonville & Caius College and their director Dr. Geoffrey Webber to join the Choir of St. John's College, for a service featuring Blair's setting of the Evening Canticles in B minor, and Haydn's 'The heavens are telling' from The Creation.

The Choir of Gonville and Caius College was founded at the end of the nineteenth century by the celebrated composer of Anglican church music, Charles Wood. The choir became an exclusively undergraduate male choir under its next director of music, Patrick Hadley. With Peter Tranchell as director, the choir became mixed in 1979 and the current director of music, Dr. Geoffrey Webber, has held the position since 1989.

The choir sings three services per week in college and joins forces with the choir here at St John's each year for a joint evensong. The two choirs have also collaborated in larger-scale events, most recently a performance of Verdi's Requiem at the Royal Albert Hall in November 2014 and two performances of Walton's Belshazzar's Feast at Ely Cathedral and the Royal Festival Hall as part of St John's College's Quincentenery celebrations in 2011. 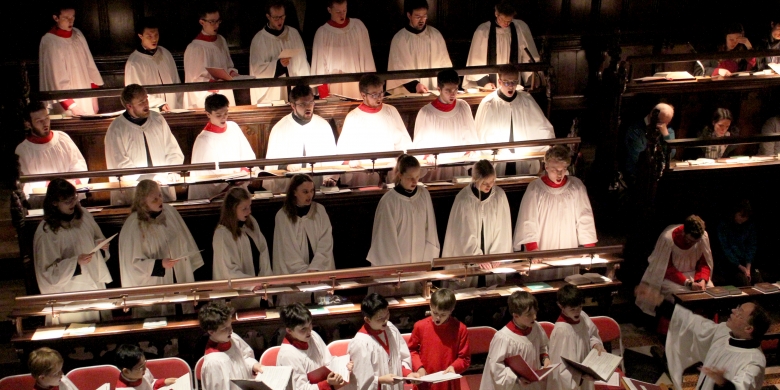 Both choirs singing the Shephard Responses under Dr Geoffrey Webber

END_OF_DOCUMENT_TOKEN_TO_BE_REPLACED
The contribution of Andrew Nethsingha and St John's College, Cambridge to the Evensong tradition - both in the chapel and on record - deserves great praise