Choral Scholar report from the US tour - Stanford, California

The choir arrived in California four days ago. The first day, a rest day, was spent - rather exhaustingly - exploring much of San Francisco on foot or by bicycle.

On the second day we travelled to Stanford University, a very verdant campus so enormous as to seem a city in its own right.  We rehearsed with the Stanford Chorale and Stanford University Symphony Orchestra in preparation for a joint concert featuring chiefly American music; Samuel Barber’s Agnus Dei and Leonard Bernstein’s Chichester Psalms.

Between this rehearsal and that concert however came another concert, at the Stanford Memorial Church, given by us alone.

We rehearsed in the afternoon. In the evening, making use of that church’s five organs we performed a various program of European music, including: Poulenc’s Mass in G; James Burton’s O Thoma! - a recent commission by the college; Harris’ Faire is the Heaven; Parry’s Hear My Words Ye People and The Annunciation by Jonathan Harvey - a composer with connections to both Stanford and St John’s.

There followed a drinks reception at which the Gents sang in accents aimed to please (and at points tooted the kazoos we had brought especially) the Queen classic, Seaside Rendezvous.  On the bus back to the Palo Alto hotel those Gents not now overcome by jet-lag continued to express themselves boldly with their kazoos and I reckon, though I confess I haven’t any evidence, that the bus driver did in fact enjoy himself. It’s rare after all to hear tudor anthems arranged for kazoo.

The audience of the concert that night had been appreciative and we hoped to build on our success in the joint concert the next day.

We rehearsed for an hour or so by ourselves in Stanford’s impressive Bing Hall, preparing Vaughan Williams’ Mass in G which was to be, we hoped, the English cherry on the American cake. The chorale then joined us and we ran through the Barber with their conductor. At four thirty in the afternoon we all had a sort of high tea featuring heaps of take-away pizza and very delicious tangerines. Then another rehearsal, this time with both choirs and orchestra.

The combination of choirs seemed to work very well; it was a great pleasure for us to work with these brilliant singers. The concert was extremely good fun and got a good reception. Hamish McLaren won the college great honour with his beautiful solo in the second movement of the Bernstein. The choir in general held its own in  the face of enthusiastic percussion.

The Gents were treated to a wonderful party with the chorale afterwards which we shall remember for at least as long as it takes for the Alka-Seltzer to come into effect. 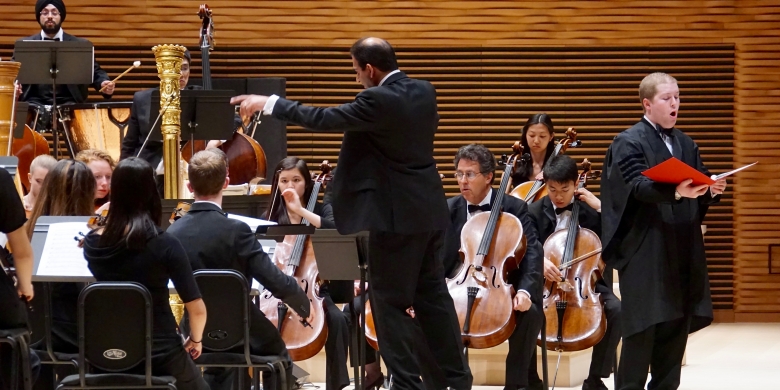 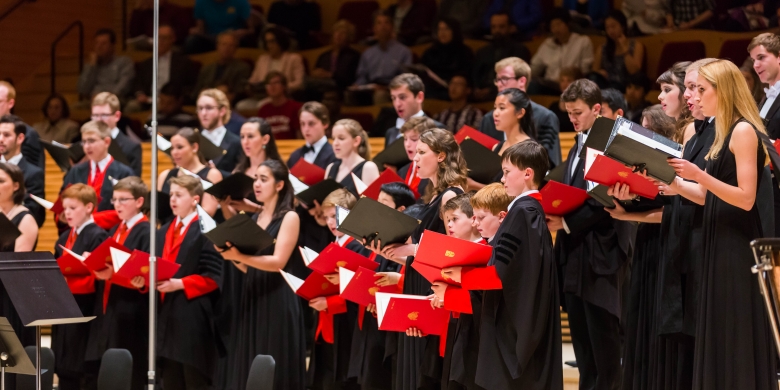 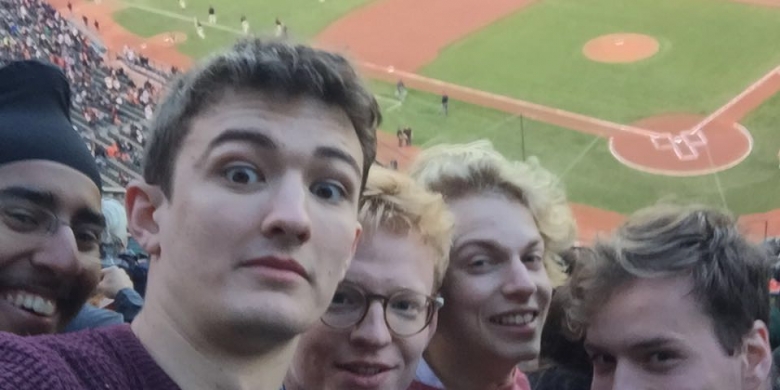 The Choral Scholars at the match, US-style!  (photo Xavier Hetherington)

Recorded on
Listen now
END_OF_DOCUMENT_TOKEN_TO_BE_REPLACED
Nethsingha is his own man and absolutely his own musician, which is why his choir continues to evolve and lead