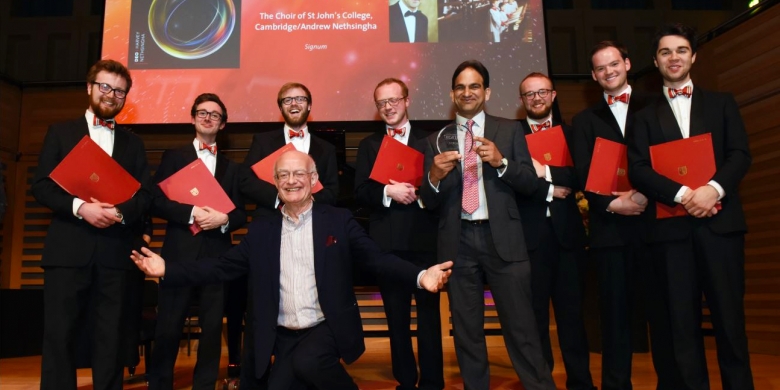 Andrew Nethsingha receives the award from John Rutter, accompanied by the Gentlemen of St John's

We are absolutely thrilled that Deo has won the BBC Music Magazine award in the Choral category! The winner was decided by public vote, and we are immensely grateful for all who voted for us.

This is the first time that this prestigious accolade has been given to a collegiate or cathedral choir and it is awarded by the BBC Music Magazine, the world's best-selling classical music monthly.

The award was presented by John Rutter to our Director Andrew Nethsingha at a ceremony at Kings Place in London yesterday. A group of the Gentlemen of St John's performed Tallis' Loquebantur variis linguis and Hassler's Verbum caro factum est.

Deo is the first recording on our new 'St John's' recording label and it features a collection of sacred works by Jonathan Harvey, who was once an undergraduate at St John's and was awarded an Honorary Fellowship at the College. Two of the works - The Annunciation and The Royal Banners - were written especially for the choir. The recording also features organ works Toccata for organ and tape and Laus Deo, as well as the popular anthems Come, Holy Ghost and I Love the Lord.

Andrew Nethsingha said of the disc: “We are very proud and grateful to have received this prestigious award. We started working on the music in April 2009, so several generations of choristers and choral and organ students have been involved in the project. I am grateful to the singers and to organist Edward Picton-Turbervill for their wonderful music-making.”

“Jonathan Harvey was one of the greatest composers of his time, but some of his Church music is less well-known, perhaps because it is difficult to perform. While many contemporary composers are vigorous self-publicists, Jonathan was quite the reverse so it is particularly gratifying when his music is recognized in this way.” Andrew was also interviewed by Presto Classical and this can be read here.

The recording has been widely successful, receiving praise from many publications including the following:

"This is an essential disc not only for admirers of Jonathan Harvey’s work in general but for all those interested in contemporary sacred music" Ivan Moody, Gramophone Magazine (Read full review here).

“a terrific disc”  “These are performances to treasure, of great intensity and remarkable power” Planet Hugill

“The Choir of St John’s College, Cambridge, has done one of its old boys proud”  “ambition has paid off handsomely”  “the music on this disc is so varied and inspiring” Financial Times

“Andrew Nethsingha and the St John’s forces have this often-challenging repertoire well under control, delivering characterful yet authoritative performances of which they can be justly proud” CD of the month​ Choir and Organ

“Staggering.  One of the most significant choral recordings of recent times?” Simon Toyne (leading conductor and choir trainer)

Recorded on
Listen now
END_OF_DOCUMENT_TOKEN_TO_BE_REPLACED
Nethsingha is his own man and absolutely his own musician, which is why his choir continues to evolve and lead