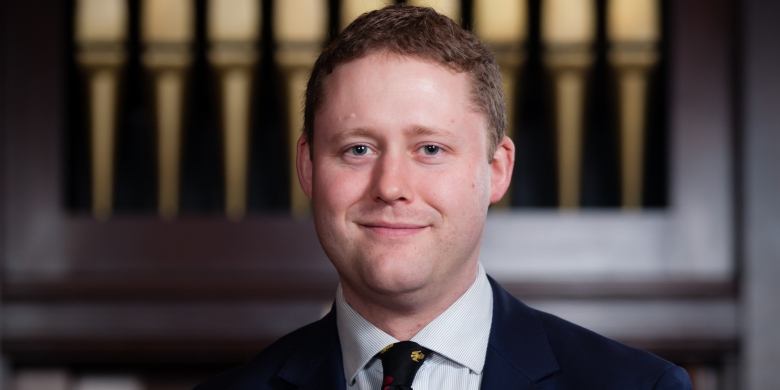 We are delighted to share the news that John Robinson - former Organ Scholar at St John's College - has been appointed Director of Music at Blackburn Cathedral.

John is currently Director of Music at St. Paul’s Choir School, Harvard Square, Cambridge, Massachusetts, and will take up the position during the summer.

John Robinson began musical life as a Chorister at Hereford Cathedral, where he continued at the Cathedral School as an organ pupil of Dr. Roy Massey MBE. Following Organ Scholarships at Canterbury Cathedral and St. John’s College Cambridge, he was Assistant Director of Music at Carlisle and Canterbury Cathedrals. He has made numerous recordings as Organ accompanist, Organ Soloist, and as Choir Director, on labels including Hyperion, Decca, Sony Classical, and Priory.

Commenting on his appointment, John said, ‘I’m absolutely delighted to be taking up the appointment of Director of Music at Blackburn from September.’

‘I’m absolutely delighted to be taking up the appointment of Director of Music at Blackburn from September.’

Recorded on
Listen now
END_OF_DOCUMENT_TOKEN_TO_BE_REPLACED
The contribution of Andrew Nethsingha and St John's College, Cambridge to the Evensong tradition - both in the chapel and on record - deserves great praise