A History of the College Chapel - Part One 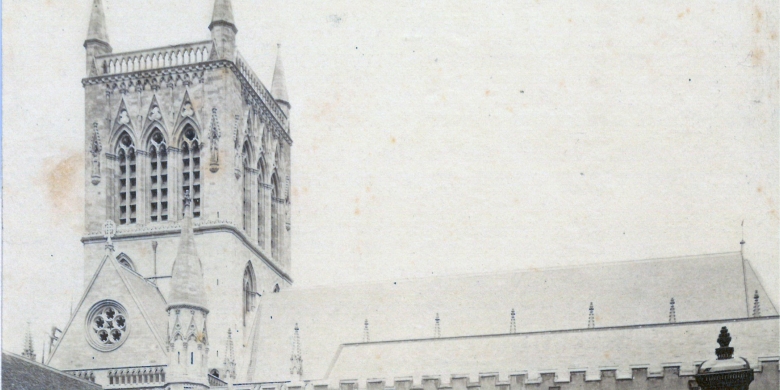 The President of St John’s College – Dr Frank Salmon, FSA – has written programme notes for the Choir’s new recording, Locus Iste, telling the story of our College Chapel. The recording marks the 150th anniversary of the Chapel’s Consecration.

In the first part of these serialised notes, Dr Salmon explains how our current College Chapel came to be built.

The release of the hundredth recording by the Choir of St John’s College, Cambridge, happily coincides with the 150th anniversary of the Consecration of the College’s “new” Chapel on 12 May 1869.

The Victorian building, designed by the great Gothic Revival architect, Sir George Gilbert Scott, replaced a relatively modest Tudor chapel which was itself a rebuilding of that of the thirteenth-century Hospital of St John, suppressed when the College was founded in 1511.

Although some in the 1860s argued for the retention of this now historic chapel, it had long been a desire of the College to replace it with a building that better reflected the size and wealth of St John’s within Cambridge University, as well as its royal status as a foundation of Lady Margaret Beaufort, mother of King Henry VII.

In 1687 the College had a plan for a new Chapel drawn up but did not act upon it. A century later, major remodelling of First Court, to include a new Chapel, only got as far as the re-facing of the Tudor red-brick south side with a Georgian stone frontage. Thus it fell to the later nineteenth-century Master, William Bateson, to put into effect this long-cherished ambition.

The immediate trigger, however, for the bold decision to rebuild was that evangelical spirit so characteristic of mid-nineteenth-century muscular Victorian Anglicanism. In May 1861, the Commemoration Sermon was preached by the Lady Margaret Professor of Divinity, William Selwyn, an alumnus of the College. Perceiving the moment to be one of historic change, Selwyn took the opportunity of the seventh Jubilee of the College’s foundation to describe its great evangelist members of the past and to plead “we must have men like these, and more in number”. The achievement of this renewed mission, Selwyn believed, had to be supported by the raising of “a Chapel more worthy of our College".

The President’s complete introduction to the College Chapel appears on the Choir’s new recording, Locus Iste, which is available to order here.

Recorded on
Listen now
END_OF_DOCUMENT_TOKEN_TO_BE_REPLACED
Nethsingha is his own man and absolutely his own musician, which is why his choir continues to evolve and lead