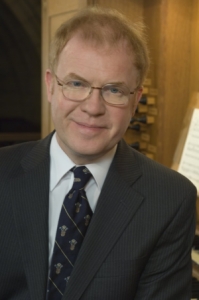 The Chapel and Choir community of St John’s were deeply saddened by the news of the sudden death of John Scott in August. One of the most illustrious musicians ever to have been a member of the College, John’s passing is a devastating loss to the musical world.

All of us at St John’s were deeply shocked and saddened to learn of John Scott’s untimely death.  He had been a member of St John’s College for 41 years, having been Organ Scholar from 1974 to 1978.  Throughout his immensely distinguished career at St Paul’s Cathedral, London and at St Thomas Church, New York, he continued to be a great friend and supporter of St John’s College Choir.

John was second to none as an organist and as a trainer of men and boys’ choirs.  He was greatly loved by all who knew him here.

On a personal note, I am hugely grateful for the warm friendship, support and encouragement he always showed to me; I know that countless others feel the same.

We are blessed that he has been such an integral part of the College and, on behalf of members of the present Choir here, I send our heartfelt condolences to all members of his family, his friends and colleagues as we mourn the passing of this incomparable man.    May John rest in peace.

The news of John Scott’s death has shocked us to the core.  Our hearts go out particularly to Lily, the Scott family, but also his friends and admirers the world over.

Few people deserve the superlatives others use in describing them.  In John’s case, there could never be too many.  He was a genius, able to command the stage as organist or conductor, content in the task of communicating his love of music.  He was passionate about standards and was tireless in his efforts to secure the finest possible musical results from himself and others.

I consider myself privileged to have been able to join him as a fellow organ student in 1976, two years after he had started at St John’s.  We had both received lessons from Jonathan Bielby, another ex-Johnian organ student.  Having arrived at St John’s I realised we had much in common, not least the north and shared a similar sense of humour. It didn’t take me long to realise I was amongst greatness, confirmed when John was invited to play the Reubke 94th Psalm at the penultimate night of the Proms in 1978.  I was thrilled for him as was our leader and mentor, George Guest.  Over the years we have pursued our own quite different careers and have shared much in the process.  John’s abilities as a player have, in my view, made him the finest organist of his generation, arguably the finest in the world.  To have been part of his evolving, prodigious talent was a huge privilege.

We will miss him more than we will ever know, for his musicianship, brilliance, kindness, care, humility, humour and generous smile and much more.  John, may you rest in peace.

My first memory of John takes me back to 1975 when St John’s College Choir gave a concert in Windsor as part of the quincentenary celebrations at St George’s Chapel.  Though the Choir was on top form, my most vivid memory is of John’s organ playing.  His accompaniments were stylish and imaginative and he gave an immaculate performance of Bach’s first Trio Sonata.  Watching him in rehearsal, I was astonished at the way he made it all look so easy.  Here was real talent, an impressive technique and musical judgment of remarkable maturity.

More recently I have enjoyed visiting John in New York on two occasions, and had the opportunity both to hear and direct the wonderful choir which he trained with such meticulous care.  It was good to find him happy, relaxed and fulfilled.   This is perhaps not surprising for St Thomas’s is a church where liturgy, preaching and music compliment each other and create a very special spiritual experience.  To borrow the Rector’s words – the glory John wanted was the glory of God.

John’s death will have come as a terrible shock to his family and to his friends and admirers world-wide.  But for Lily in particular, his loss will be very hard to bear.  She will know how much St John’s College meant to John and she should also know that his name and reputation will live on here.

Memories keep flooding back! In 1970 a red headed 14 year old head chorister listened to me playing Dieu parmi nous in Wakefield Cathedral; he later told me, "This is what inspired me to become an organist and choirmaster". Somewhere at home I still have a repertoire list worthy of someone twice his age written in his beautiful hand writing. I remember driving down in his father's Bentley to see him receive his FRCO at the Royal College of Organists. Then there were ten minutes in my garden at Wakefield as I advised him that the world of organ and church music was not for the fainthearted; but he knew he could master it.

John played for the first cathedral choir recital I conducted in a village church outside Wakefield. But he could be hot-headed and to show who was boss I did without his services at another recital, preferring to play myself and let the choir get on with it! I saw him many times at St John's and attended his wedding to Jane Lumsden in the chapel, witnessed by a star studded group of organists and choirmasters including (prophetically) Gerre and Judith Hancock from St Thomas's, Fifth Avenue.

We kept in touch as John established himself in London. He wanted me there at his induction service as Organist and Director of Music at St Paul's. Amen Court was a useful place to leave our car when we were flying from Heathrow. We babysat and attended his riotous 40th birthday party in the gardens. He performed my music at St Paul's and our two choirs sang together as Bishop David Hope was translated from Wakefield to London. We went to his emotional farewell Verdi Requiem as he prepared to leave St Paul's.

There were chance encounters. Jayne and I were camping in the Dordogne and decided to try out a recommended restaurant which was somewhat off the beaten track. Who should we find there but John and Jane, Emma and Alex. The next day we were all over at our campsite as John and I tried to get the barbecue alight with a plastic air pump. Result - one useless melted air pump! John played for our wedding (a feast of Widor - the Mass for Two Choirs and the first movement of the Sixth Symphony) and I attended his father's funeral.

John did not forget his Yorkshire roots. For Kenneth Leighton's Memorial Concert I invited him to play Leighton's organ concerto - both he and Leighton were Wakefield Cathedral choristers cut off in their prime in their late 50s. At his last Wakefield recital I asked him to include Liszt's Ad nos (all 30 minutes of it!), and he was much amused that somehow the tuba had come on far too early and not just on the last page! I had booked him to play for the 125th anniversary of Wakefield & District Organists Association in July next year. He brought St Thomas's Choir to sing at Wakefield and it was the best and most amazing concert of church music I have ever heard.

John loved New York and New York loved him. We stayed several times in his apartment overlooking Central Park. We tried to get him to go sightseeing with us, but always there were musical matters to attend to! Two years ago we were there for his wedding to Lily Ardalan (James O'Donnell directed St Thomas's Choir and David Briggs was one of four organists!). For a wedding present I wrote an arrangement in trio sonata style of the Yorkshire folksong Pratty Flowers, which gave him great amusement.

In 2011 for the 500th anniversary of the College John gave the evening celebrity recital (the rest of us played before Sunday evensong). David and Alice Hill invited John and Lily, Jayne and myself to dinner at their house in Girton. The evening was long and hilarious as my former head choristers at Wakefield and Manchester told me what had really happened when my back was turned!

O John, why did you have to leave us? You were my head chorister, pupil and friend. You had a beautiful spoken voice, you were generous, kind and unassuming. You had found new happiness with Lily and were looking forward to the joys of fatherhood. You had great plans for new recordings, concerts and services. What you learnt at St John's has benefitted us all. You were a genius who made us hear music in a different way. Thank you for making the world a better place. May you rest in peace and rise in glory!

Recorded on
Listen now
END_OF_DOCUMENT_TOKEN_TO_BE_REPLACED
Nethsingha is his own man and absolutely his own musician, which is why his choir continues to evolve and lead