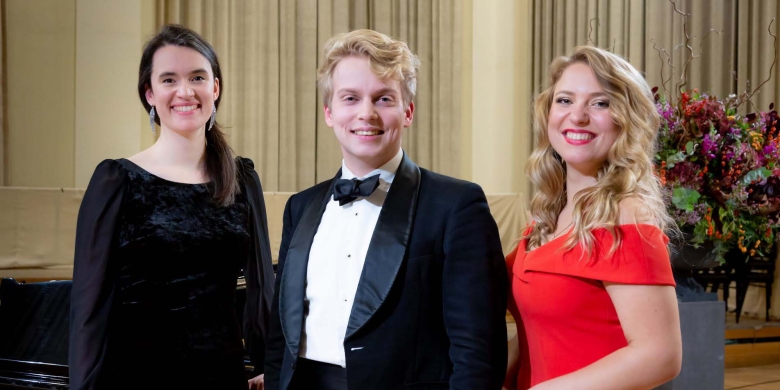 Hugh Cutting, former choral scholar at St John’s (2015-18) has won first prize in this year’s Kathleen Ferrier Awards, one of Britain’s most prestigious awards for singers. He is the first countertenor to win first prize in the Ferrier’s 66-year history.

The semi-finals and final of the competition took place at the Henry Wood Hall in front of a jury that included baritone Sir Thomas Allen, mezzo-soprano Alice Coote, soprano Valerie Masterson, tenor Ian Partridge and pianist James Baillieu. The final will be streamed via the competition website in two parts, and will be available on Saturday 4th and Sunday 5th December from 7:30pm for one month.

Hugh performed together with pianist George Ireland, and he sang an aria from Handel's Agrippina, d'Indy Magrigal, two of Dvorak's Biblical Songs, an extract from George Benjamin's Written on Skin and Campian's Faire, if you expect admiring. The latter piece was arranged by another former member of the choir, composer Piers Connor Kennedy.

"This is obviously a huge honour; George and I are so thrilled, particularly with the flurry of supportive messages and emails that have come with it! Competitions are always an unknown entity, really, and I’m sure many of the finalists would have been worthy winners for different reasons, so we’ll take this with a pinch of salt and much gratitude.

"I owe so much to St John’s, to New College Oxford where I was a chorister, the Royal College, and most to my parents and brother who nurtured everything, especially my impressions of ‘strange altos’ like Iestyn Davies when I was 8."

Hugh is currently a member of the Royal College of Music Inertnational Opera Studio. As well as having recorded with The King’s Consort, he has recently performed together with former St John’s chorister and choral scholar Iestyn Davies on a new album with Fretwork on Signum Records. You can watch one of the duets from this album below. Forthcoming projects include performances as 'Arsace' in Handel's Partenope with Les Arts Florissants & William Christie in Barcelona and Versailles, Bach St John Passion solos with Polyphony & Stephen Layton in St John's Smith Square, and his debut with Zurich Opera in a Monterverdi Madrigals ballet.

Other Johnian choral scholars who have succeeded at the Kathleen Ferrier Awards in recent years include baritones Theodore Platt (2nd Prize, 2019) and Gareth John (1st Prize, 2013).

Recorded on
Listen now
END_OF_DOCUMENT_TOKEN_TO_BE_REPLACED
Nethsingha is his own man and absolutely his own musician, which is why his choir continues to evolve and lead