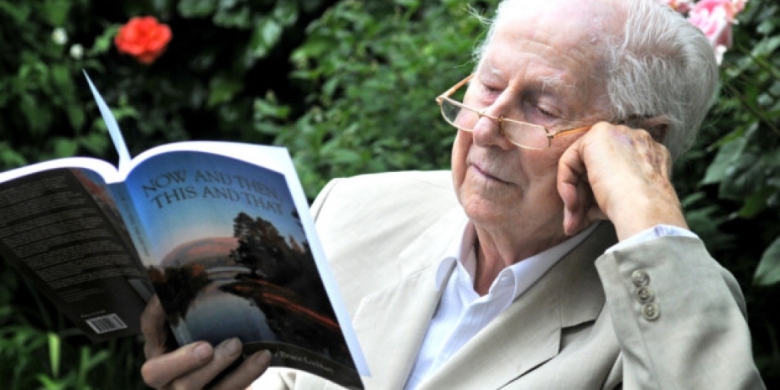 We are saddened to hear of the loss of Logie Bruce-Lockhart, a former Choral Scholar (1940-46) who later became Headmaster of Gresham’s School (1955-82).

By all accounts, Logie led a remarkable life: whilst at Cambridge, he won the Wright Prize for Modern Languages and was a rugby union and a squash Blue; he later played fly half for Scotland’s national rugby team. He interrupted his studies and Choral Scholarship to fight in the Second World War, where he played a role in liberating Bergen-Belsen, and was put in charge of a refugee camp of 5,000 Polish refugees on the Russian frontier. As Headmaster of Gresham’s, he introduced changed to make the school co-educational, supported Sir James Dyson in continuing his education after the death of his father, and arranged for Gresham’s alumnus Benjamin Britten to visit the school for a concert in 1964. Logie was also a keen journalist, and he contributed to a variety of publications as well as writing a book on his life, Now and then, this and that, published in 2013.

The Eastern Daily Press has published an obituary, which includes a collection of tributes from those that knew him. The paper has also published a further tribute from Sir James Dyson.

Logie died aged 98 on Monday 7th September after a short illness. There will be a private funeral at St Andrew’s, Holt, followed by interment in the churchyard, which is where Logie’s wife and daughter are buried. A celebration of his life will be arranged at a later date.

Recorded on
Listen now
END_OF_DOCUMENT_TOKEN_TO_BE_REPLACED
Nethsingha is his own man and absolutely his own musician, which is why his choir continues to evolve and lead