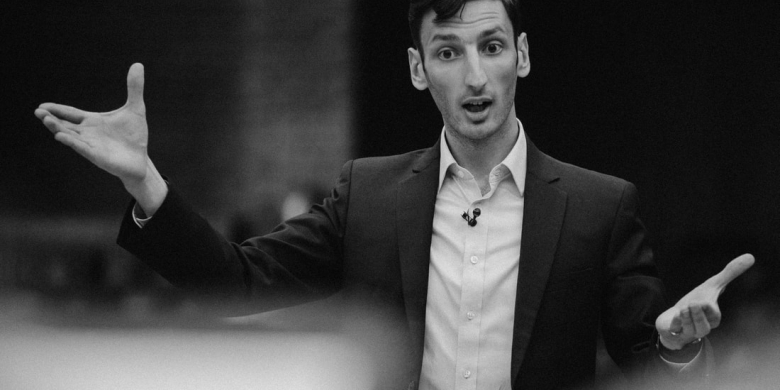 We are delighted to hear that Quintin Beer, a former Chorister (2000-06) and Choral Scholar (2012-15), has been appointed as Director of Music at St Peter's College Oxford. He will succeed former directors Roger Allen and Jeremy Summerly, and will take over the position from interim director Edward Higginbottom in January 2021.

Quintin sang with St John's under the direction of our three most recent directors: Christopher Robinson, David Hill, and Andrew Nethsingha. He studied Music at St John's before taking the Choral Conducting masters course at the Royal Academy of Music, studying with Patrick Russill. He is currently Director of Music at St Cuthbert's Church, Earl's Court, Artistic Director of University of London Chamber Choir, and Musical Director of Yately Choral Society. Since June 2018, he has also been Associate Music Director of Pegasus Chamber Choir. In addition, he is the Choral Director at the Junior Department of the Royal Academy of Music and directs the monthly ‘Evensong in the City’ series at St Bartholomew-the-Great.

Recent career highlights include winning the Best Interpretation of a French Baroque Piece at the International Competition for Young Conductors in Paris in October 2019, winning second prize at the Dima International Music Competition in Cluj, Romania, and gaining a place on the Jury’s List of the 2019 World Choral Conducting Competition. He was made Associate Conductor of the Brandenburg Choral Festival in November 2019.

Quintin said of his appointment: "It is very humbling to be offered this position and to be following in the footsteps of such illustrious predecessors as Roger Allen, Jeremy Summerly and Edward Higginbottom. I owe so much of my own choral development to the wonderful experiences I was able to enjoy at St John's, both as a chorister and a choral scholar. My choral preferences have always been strongly informed by the full-bodied and sonorous timbre of St John's Choir. I will be proud to bring these features with me to St Peter's."

The Master of St Peter's, Professor Judith Buchanan, said: "Quintin comes to us with an impressive record of excellence, a nuanced understanding of college music, both as a key contribution to the life of the chapel and as part of the wider cultural life of the college, and with excellent ideas about how to lead the musical life of St Peter’s in expert ways marked by thought, energy, and care. We are delighted that he will be joining us and we look forward to welcoming him to St Peter’s in January."

St Peter's has a strong musical tradition, with one of the largest groups of undergraduates studying Music in the university. Quintin will take charge of the twenty-five strong mixed-voice chapel choir, which normally performs at Evensong on Thursdays and Sundays during term, assisted by the two college Organ Scholars. He will also oversee music-making more generally within the college. The Victorian Chapel is situated at the heart of the college, with a generous acoustic and flexible performance space that lends itself to the many recitals, concerts, operas, plays, and lectures that take place there throughout the year. It retains its original 1875 "Father" Willis organ, restored by Nicholson & Co. in 2003, as well as a 1906 Blüther grand piano, a Nicholson chamber organ, and a single manual harpsichord built by Robert Goble. The Chaplain is the Revd Dr Elizabeth Pitkethly, a pianist and organist who has a background in academic music.

We wish Quintin every success in his new role. Watch performances from Quintin's final recital for his masters course at the Royal Academy of Music (at St James's Church, Piccadilly) below:

Recorded on
Listen now
END_OF_DOCUMENT_TOKEN_TO_BE_REPLACED
The contribution of Andrew Nethsingha and St John's College, Cambridge to the Evensong tradition - both in the chapel and on record - deserves great praise