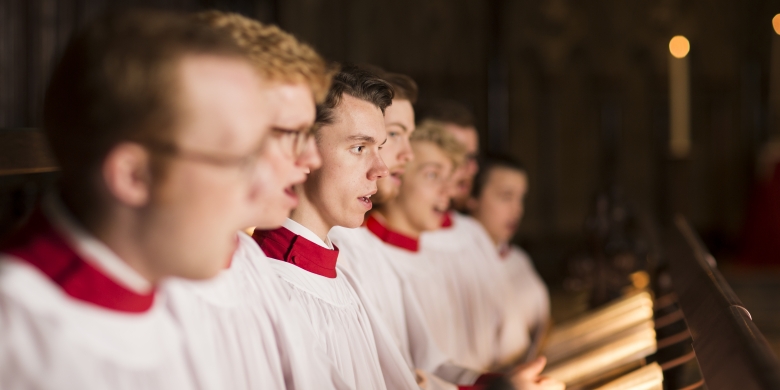 The Choir of St John's College, Cambridge invites applications for the post of Tenor Lay Clerk to sing with the Choir at Chapel services and other special events throughout 2018-19 Academic Year.

Remuneration for this part-time post is currently £11,075 per annum. Subject to availability, shared College accommodation may be available for rental.

The person appointed to the post will be required to work alongside the Choristers and Probationers of St John’s College Choir.   Applicants must be willing to undergo child protection screening appropriate to the post, including enhanced checks with past employers and the Disclosure & Barring Service (DBS).

Further details of the post, together with an application form, can be obtained from the Choir Administrator, Caroline Marks, on 01223 338718 or c.f.marks@joh.cam.ac.uk

The closing deadline for the receipt of completed applications is 0900 on Wednesday 25 April 2018. Auditions will be held in early May.

Jonathan Dove 'Seek Him that Maketh the Seven Stars'

The Choir of St John’s College, Cambridge is one of the finest collegiate choirs in the world, known and loved by millions from its broadcasts, concert tours and over 90 recordings. Founded in the 1670s, the Choir is known for its distinctive rich, warm sound, its expressive interpretations and its breadth of repertoire. Alongside these musical characteristics, the Choir is particularly proud of its happy, relaxed and mutually supportive atmosphere. The Choir is directed by Andrew Nethsingha following a long line of eminent Directors of Music, recently Dr George Guest, Dr Christopher Robinson and Dr David Hill.

The Choir is made up of around 20 Choristers and Probationers from St John’s College School and 15 Choral Scholars who are members of St John’s College, its primary purpose being to enhance the liturgy and worship at daily services in the College Chapel. The Choir has a diverse repertoire spanning over 500 years of music. It is also renowned for championing contemporary music by commissioning new works, including recent compositions by Joanna Ward, Nico Muhly, James Burton and the College’s Composer in Residence Michael Finnissy. The Choir regularly sings Bach Cantatas liturgically with St John’s Sinfonia, its period instrument ensemble.

The Choir brings the ‘St John’s Sound’ to listeners around the world through its weekly webcasts (available at sjcchoir.co.uk). In addition to regular radio broadcasts in this country and abroad, the Choir usually makes two CD recordings each year. In May 2016 the College launched its new ‘St John’s Cambridge’ recording label (in conjunction with Signum Classics) on which the Choir has released the BBC Music Magazine Award winning recording of Jonathan Harvey’s music: DEO; Christmas with St John’s; and KYRIE (works by Poulenc, Kodály and Janáček).

The Choir also maintains a busy schedule of concerts and tours internationally twice a year. Recent destinations include Denmark, Germany, Hungary, and France, the USA, the Far East and the Netherlands. It also performs regularly in the UK, with venues including Symphony Hall, Birmingham and Royal Festival Hall, London.

The Gentlemen of St John's

The successful applicant will have the change to perform with The Gentlemen of St John’s. With a repertoire of music ranging from sacred music and folksongs to their prized close-harmony arrangements (mostly written by current and former members), the Gents is a very popular group in College.  As well as the legendary 5.00 a.m. slot at the St John’s May Ball and Christmas gig at the Maypole, the members of the Gents have a busy yearly schedule of touring, concerts and recordings which can number fifty external engagements.

The Gents have recorded 10 CDs, most recently White Christmas, Indulgence, and Lazing.