Three broadcasts with the BBC and Classic FM in May 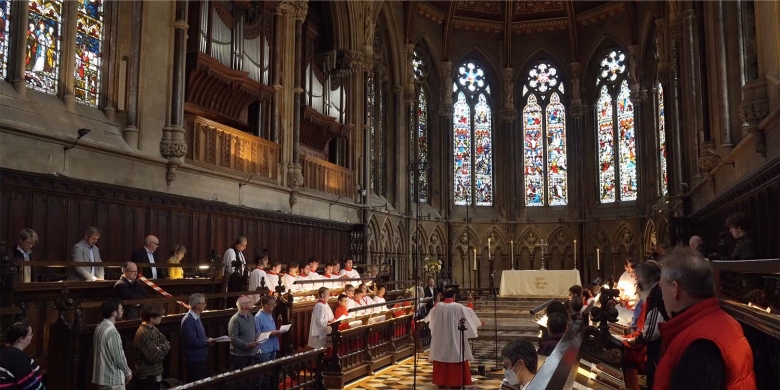 Choral Evensong on 4th May 2022, broadcast live with BBC Radio 3

We were delighted to take part in no less than three broadcasts at the start of May with both the BBC and Classic FM.

The next broadcast on Sunday 8th May was a BBC Radio 4 'Sunday Worship' service titled 'Love took my hand' (listen here): a celebration in words and music of the life of priest and poet George Herbert.  The service was led by the Dean of Chapel, the Rev'd Dr Mark Oakley, who examined Herbert's works in the context of the Easter season. In addition to readings by members of the College, the Chapel Choir led the congregation in a selection of works using Herbert's texts, including the hymns 'King of glory, King of peace,' and 'Teach me, my God and King'. This programme is available to listen to online until Sunday 5th June.

Finally, on Thursday 12th May, it was a great pleasure to collaborate again with Classic FM in a video live-stream of Choral Evensong via Facebook (watch here). Music included Brian Kelly's Service in C and Edward Elgar's Give unto the Lord, with the service closing with Louis Vierne's Final (Symphonie II) played by George Herbert. You can watch the service below, and an Order of Service is available here. The service should remain on Facebook indefinitely.

Recorded on
Listen now
END_OF_DOCUMENT_TOKEN_TO_BE_REPLACED
Nethsingha is his own man and absolutely his own musician, which is why his choir continues to evolve and lead