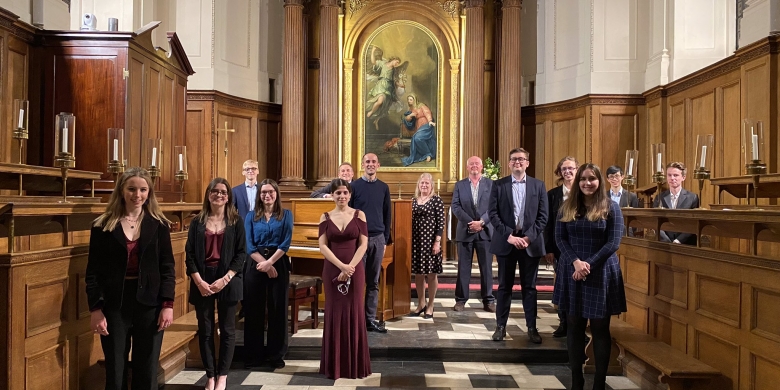 The final of the 2021 Clare College Song Competition

We are so pleased to hear that Johnians and current Choir members, Tom Butler and George Herbert, were the winning duo at the 2021 Clare College Song Competition. Additionally, George was also awarded the Accompanist Prize at the final, which took place in Clare College Chapel and was judged by Mark le Brocq, Ben Parry, Nicola-Jane Kemp and Graham Ross.

The duo are both currently studying music at St John's, where Tom sings in the College Choir as a bass, and where George is the current Herbert Howells Organ Scholar. The pair's winning programme was as follows:

The joint Second Prize winners were Hannah Dienes Williams (Clare) and Katherine Gregory (Newnham), both of whom were accompanied by Madeleine Brown (Trinity).

The panel's summary of Tom and George's performance was as follows:

"This is a wonderful vocal instrument, and the real deal. Piano playing was beautifully executed throughout, with such care taken to bring out individual lines. A great duo with the best piano playing of the evening. George made the upright sound like a grand! This was an excellent programme – so well suited to your voice and there was never a moment when the listener was worried as the delivery was so technically and musically assured. Congratulations to both of you on winning both the 1st prize and Accompanist Prize – richly deserved and best wishes for the future."

Andrew Nethsingha remarked: "We are hugely proud of Tom and George, who are superlative musicians; I am in awe of them both! Congratulations to them and to all the other outstanding singers and pianists in this prestigious competition. Thank you to Clare College for organising this very important part of the Cambridge music scene."

Part of the prize for the winners will be a further recital to take place in London (details are to be confirmed). You can watch Tom and George performing the Rachmaninoff from their programme below:

Recorded on
Listen now
END_OF_DOCUMENT_TOKEN_TO_BE_REPLACED
Nethsingha is his own man and absolutely his own musician, which is why his choir continues to evolve and lead