Tour to Hong Kong and Singapore 2018

This Easter the Choir is returning to the Far East to perform concerts at the Hong Kong City Hall Concert Hall on Tuesday 27th March and the Singapore Esplanade on Saturday 31st March. The programme is entitled 'Faire is the Heaven' and will include a selection of the finest choral works from the 16th Century to the present.

If you would like to hear our concert programme before we go, do come and see us at our pre-tour concert in St John's College Chapel at 7pm on Monday 19th March where we will be performing much of the same repertoire.

Andrew Nethsingha, our Director, is excited to return: "It is a great pleasure to be returning to Singapore and Hong Kong, two places which I love!

“The Anglican choral tradition is one of the jewels in our country’s cultural crown. It is a joy for St John’s College Choir to be able to share this with others around the world, acting as ambassadors for the great tradition. Our programme includes a couple of short pieces dating from early in our college’s 500 year history. However the majority of the programme is music written since our Chapel was built 150 years ago. Much of the programme is British, but we include French, Russian and American pieces as a sample of our wide-ranging repertoire."

Andrew has created a short playlist containing some of our concert repertoire as well as instrumental work by composers that are featuring in our programme:

Andrew's Playlist for our tour of Hong Kong and Singapore

You can listen to the playlist on Spotify here. A full recording of Christopher Robinson's 'Jesu, grant me this, I pray' – recorded at Evensong on 27th April 2016 – can be listened to below.

Whilst there, we are looking forward to collaborating with the Raffles Girls' School Choir in a workshop at their school. We will also be performing at special recitals for St John's College alumni based in Hong Kong and Singapore. Several future scholarship students of St John’s  - including the first winners of the new College Hong Kong Scholarship programme - will also be in attendance.

On Easter Sunday, the Choir will be performing at a morning service at St Andrew's Cathedral in Singapore. This is an especial privilege as it is rare that the Choir has the opportunity to sing in services at Eastertide.

If you would like to follow us whilst we are there, there will be regular updates, videos, live-streams and more via our website and social media platforms, all of which can be accessed via the icons at the bottom of this page. 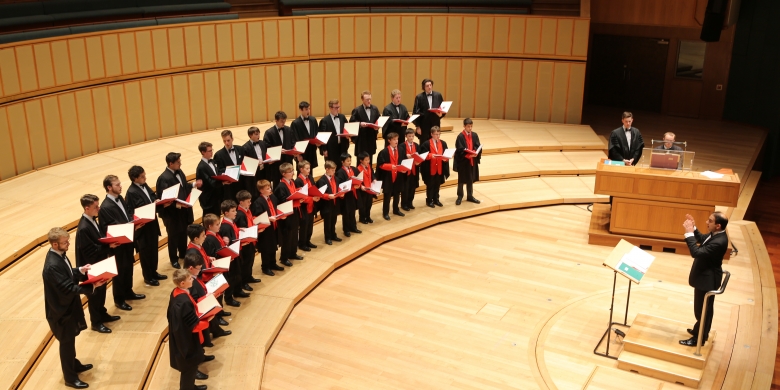 The Choir performing at the Singapore Esplanade in 2015

The Choir last visited Hong Kong and Singapore in 2015, where they were honoured to be invited to sing at the Lying in State of Mr Lee Kuan Yew, the founding Prime Minister of Singapore. Mr Lee was a student at Fitzwilliam College, Cambridge, where he graduated in Law at the very top of his cohort, and was subsequently made an honorary Fellow of the College.

We also performed concerts at Hong Kong City Hall and Singapore Esplanade, as well as collaborating with choirs from Hong Kong University and the Yong Siew Toh Conservatory of Music, National University of Singapore. The Straits Times said of our concert in Singapore "The sheer homogeneity of sound, with none of the disparity of voices standing between men and boys, was impressive and a balm to the ears."

Travelling alongside us are the Gentlemen of St John’s.. Made up of our 'back row' of the Choir, they're a remarkably versatile group that performs music ranging from early sacred music to modern close-harmony.

Here's the Gents and soloist Simon Grant with 'Fever'. Come along to one of our concerts in Cambridge, Hong Kong, and Singapore, and you might just catch them singing one of their songs...

As well as William Harris' 'Faire is the Heaven' which features on our tour trailer, our two Organ Scholars will be performing solo works. James Anderson-Besant will perform the finale of Widor's Organ Symphony No. 6:

James Anderson-Besant and the finale of Widor's Organ Symphony No. 6

This webcast is the first service of the 2020/21 academic year, and the first Choral Evensong to be sung since 13th March. It therefore marks the end of an extraordinary period of silence in the Chapel's history, and the start of a very exciting, if challenging, new term.