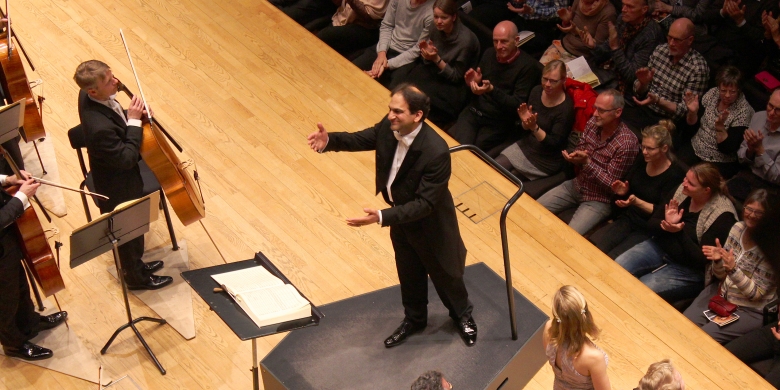 The Choir were delighted with both performances of Haydn's Creation this April, where we joined forces with the Herning Boys Choir and the Aarhus Symfoniorkester as well as soloists Malin Christensson, Neal Davies, Klara Ek and James Gilchrist. We were well received and were given standing ovations at both venues: the Symfonisk Sal in Aarhus, and the Herning Kongrescenter. We were very pleased to be conducted by our Director Andrew Nethsingha, as this was his first engagement with the Choir since returning from his sabbatical.

We were all especially grateful to Klara Ek, who with very short notice effortlessly stepped in at the last minute to give a marvellous rendition as the soprano soloist at the second performance.

The Symfonisk Sal (Symphony Hall) in Aarhus is a stunning new concert hall completed in 2008. It is a part of a collection of performance spaces that together form the Musikhuset (Music Hall), the largest performance complex in Scandinavia. It has been the permanent home of the Aarhus Symfoniorkester since 2007. Aarhus is also a European Capital of Culture for 2017.

Our second performance was at the Kongrescenter in Herning, home of the Herning Boys Choir. The Choir was founded in 1949, and consists of 50 men and boys led by Mads Bille. Its formation was inspired by the English Choral tradition, and both the choir and its director are at the forefront of promoting choral music throughout Denmark. They have strong ties with St John’s having already performed Creation with us in 2013 as well as working in collaboration with former director Dr Christopher Robinson.

The events were covered on Denmark's classical music station 'DR P2' (the article is in Danish but a rough translation can be made through browsers such as Google Chrome).

There are four excellent reviews, including a rare six-star review below (these are also in Danish, but we hope to include translations soon):