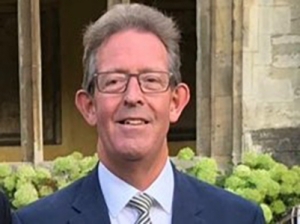 Tim Jones was both a chorister at St John’s and a Choral Student under George Guest. After a spell as a Lay Clerk in Worcester Cathedral Choir, his professional career has been spent largely in choral music, alongside teaching and examining.

As a Vicar Choral in St Paul’s Cathedral Choir (1986-2019), he appeared frequently as a soloist in the annual performances of  Messiah and the Bach Passions and on CD recordings, as well as participating in all the major services held in the Cathedral, celebrating such occasions as HM The Queen’s Golden and Diamond Jubilees, her 90th birthday, HM The Queen Mother’s 100th birthday and the Funeral of Baroness Thatcher of Kesteven.

He has been a member of The Sixteen for over thirty years, travelling extensively and singing in the USA, Australia, Brazil, China, Hong Kong, Japan, Mexico, New Zealand, Russia, Scandinavia, Singapore and throughout Europe. He featured on television in the choir’s much-acclaimed BBC 4 series Sacred Music, presented by former St Paul’s chorister, Sir Simon Russell Beale, and also helps select and coach the young singers on the training programme, Genesis Sixteen.

END_OF_DOCUMENT_TOKEN_TO_BE_REPLACED
Nethsingha is his own man and absolutely his own musician, which is why his choir continues to evolve and lead